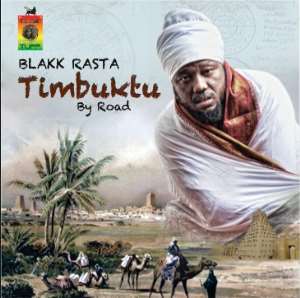 Kuchoko Legend, Blakk Rasta has exclusively unveiled the album cover for his much-touted 32-track album recorded in a span of two years, TIMBUKTU BY ROAD.

The beautiful cover has antiquity written all over it. If the cover is anything to go by, then the album ill be antiquatedly smashing in these modern times. The album is recorded live in a time when our music is all be-ridden with cold computer beats and sounds. The 2-CD album drops at a media listening on Blakk Rasta's birthday, 2nd September 2019 at Alisa Hotel when the artiste will be 45 years.

Blakk Rasta keeps the Reggae beat pumping both on radio and on stage where his energy is unsurpassed. Unprecedentedly, the artiste is touring the country every weekend to interact with media practitioners in every region announcing the arrival of his TIMBUKTU BY ROAD album

Blakk Rasta says coming March 2020, he will embark on a nationwide tour to perform in concerts to get closer to the people while teaching history at every stop. It looks like a heavy schedule for the Kuchoko Legend but he has done it over and over again.

TIMBUKTU BY ROAD is arriving with a storm heavier than a tsunami. Could this just be the Grammy Ghana has been waiting for?