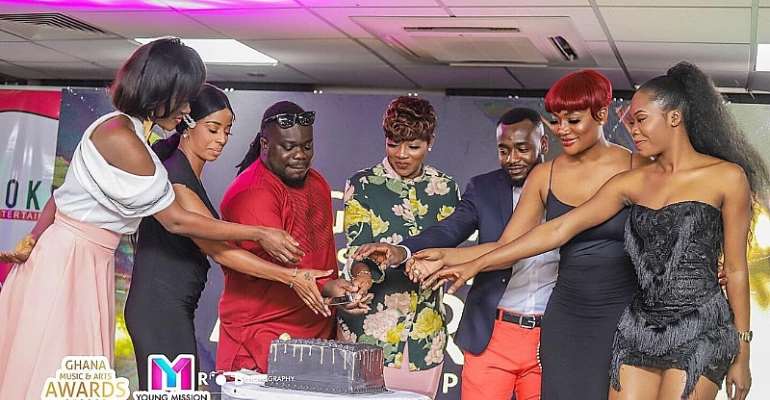 Young Mission Entertainment in partnership with FOKS Entertainment have have officially launched the Ghana Music & Arts Awards Europe 2019. The event took place at the Golden Tulip Hotel here in Accra on the 16th of August 2019.

In attendance were various dignitaries including Royals of the Ashanti Kingdom, Actors, Actresses, musician, industry players and a cross section of the media. The red carpet was hosted by Priscilla Opoku Agyeman aka Ahoufe Patri and Aaron Ayiih.

Jay Foley took charge of the Master of Ceremony as he engaged the audience and shared much on the upcoming evening. The CEO of Young Mission Entertainment, Frimpong Ebenezer Amoako on his speech made note of certain key targets of the awards scheme. He made mention of the need to spread the creatives beyond the borders of Ghana, recognition of Ghanaian acts living in Europe and promoting the culture as well.

The night had Fameye, Legend AB Crentsil and Danny Beatz entertaining the crowd with the best of musical performances.

The various categories for the awards which will be taking place were made known. They include Artiste of the Year, Best African Act, Best Rapper of the Year, Radio Dj of the Year amongst others. Submission of entries for nominations officially begins on the 19th of August. For more information, check out the Ghana Music And Arts Awards Europe on these social media handles :