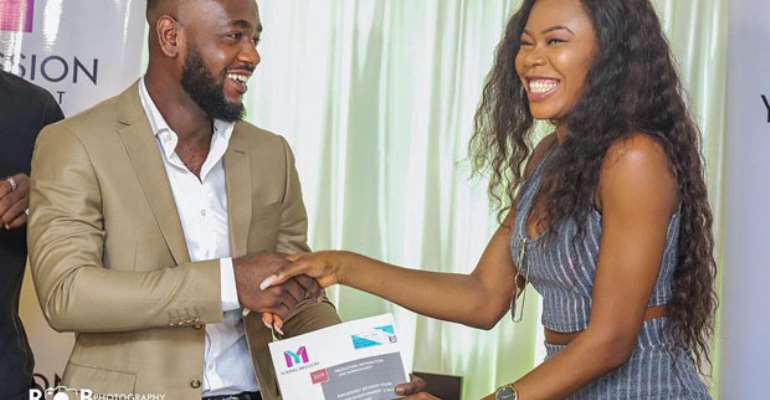 Frimpong Amoako presenting a copy of the contract to Freda Rhymz

Young Mission Entertainment, an international record label and artiste management company based in France, has signed a five-year record, marketing and distribution deal with Freda Rhymz.

The deal, which was signed at a short ceremony held at the premises of the Young Mission Entertainment Ghana office in Accra, was graced by a section of the music stakeholders.

Though management of the record label failed to disclose the amount involved in the deal, sources told BEATWAVES in an interview that the deal is very 'juicy' and it comes with a brand new car and an accommodation.

The record label decided to sign the Freda Rhymz because it fell in love with her music, singing skills, as well as her stage performance.

Speaking at the signing ceremony, the Chief Executive Officer (CEO) of Young Mission Entertainment, Ebenezer Frimpong Amoako, indicated that his outfit will make an impact on the Ghanaian music industry.

He said his outfit has, over the years, been involved in the development of Ghanaian music and artiste management, adding that they are currently working with a number of local and international artistes.

He revealed that his outfit has established a vibrant distribution network which will ensure that the work of the artistes on his label gets to the market place.

According to him, Freda Rhymz will be managed in Ghana by A.V.O, a Ghanaian-based artiste management company headed by Allen Kofi Anti.

On his part, Allen Kofi Anti disclosed that his outfit attaches a lot of importance to developing Ghanaian artistes and enhancing their image on the international music market.

Freda Rhymz, who was excited about the deal, expressed her willingness to assist the company in its activities to develop and promote the Ghanaian music on the international music scene.

She thanked everyone who has supported her career and promised that with the backing of Young Mission Entertainment, she will do her best to see Ghana music compete with those on the international music scene.

Freda Rhymes made history as the first female contestant to win the MTN Hitmaker last year and won the admiration of many, including the CEO of SarkCess Music, Sarkodie, who promised to work with her.