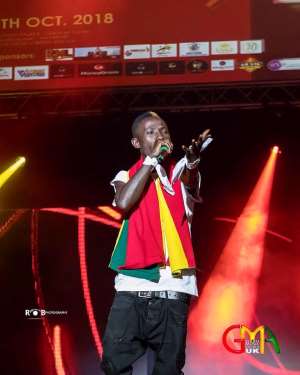 Ghanaian Swedru-based artiste and boss of Pa2Pa Soljas, Justice Amoah known in the showbiz industry as Patapaa aka Patapeezy has explained why he wouldn’t perform the “Scopatomana” song.

This comes after news went viral that he has not been performing the song on stage because he has forgotten the lyrics in the song.

Speaking in an interview on “Showbiz Agenda” on Zylofon FM 102.1, the “one corner” hit maker revealed that he never forgot the lyrics but he refused to perform the song because he (Kawoula Biov) had been accusing him of stealing the song.

“Noo, I never forgot the lyrics. It`s my own words so I can’t forget but I don`t even want to listen to the song again. I never said the song was mine but he was moving from media houses to media houses accusing me of stealing the song. The scopatomana was my word and it was making the song trend but I don’t know why he should be going round saying I had stolen the song. I never forgot the lyrics and whether i forgot or not, is my words” he narrated.

According to him, he didn’t want to perform the song because the more he had performed it, the more it had trended and he didn’t want it so because Kawoula Biov disgraced him. Talking about his music career, he pointed out that he was a highlife artiste before he came into the industry but those highlife songs hadn’t gotten recognition because that isn’t what he is known for in the industry.

He further refuted claims and rumours that he dissed rapper Medikal with his ”supaBet” track during the beef between he (Medikal) and Strongman. According to him, fans tend to fight and even kill themselves during beefs between artistes so he wanted to drive the attention of fans from the beef in order to avoid such calamities.

Addressing controversies around his white girlfriend of ever dating many artistes in the industry, the “Kyensee” hit maker revealed that it was just a picture she had with them but it didn’t mean she dated them.

”If that’s the issue, then me Patapaa I have about 1000 girlfriends. You are an artiste so when you travel to Europe for a show, everybody wants to take a picture with you. Every girl I take a picture with gets hype but it doesn’t mean I’m dating them” He added.

Talking about his album and the cover art, he told the host Sammy Flex that he has used all the challenges and barriers he had encountered in the music industry to do his album.

“You know when we started, many were fighting us spiritually and physically and even till now. The album launch is on the 16th, it was on last year 16th that the one corner song trended and I have also spent 16 years in the industry before coming out” he concluded.