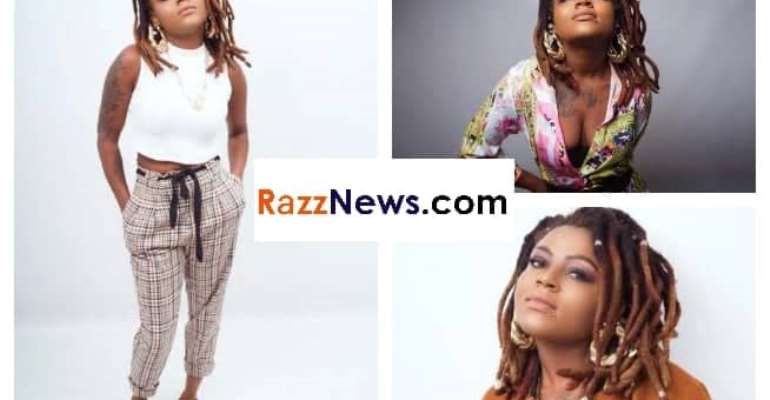 Ghanaian music enthusiasts who have been craving to see another ingenious female artiste emerge to feel the leviathan vacuum left by late Dancahall Diva,Ebony Reign,have finally had it in the name of Eyeson.

Known in real life as Richlove Kyei, Eyeson is a UK-based Ghanaian Afro-pop artist with a distinctive contemporary sound. Born into a Christian family in Kumasi,Eyeson in her early teenage years had developed into a unique singer ,and a song writer who gained immense attention of many.

As a result, she has performed and worked alongside many artists from different genres including hip hop, RnB, Afro beats, and reggae due to the versatility of her style.

In May this year (2019),the sensational Eyeson, released her maiden hit song titled ‘Odifour — that features NKZ President Guru.

Crooned in a mid-tempo vein, and produced by Kidnature,Eyeson called on Pastors in “odifour’ to pray for her in order to solve spiritual problems hindering her life.

listening to how the song was recorded,RazzNews.com can state without mincing words that, it’s only a person with a demonic traits who would make denigrating remarks about it.

The vocal ability, lyrics, Guru’s rap and entire production is world-class.It’s actually a potential ‘ Afro-pop Song of the Year ‘winner at the 2020 Ghana Music Awards which Wendy Shay and Fantana will grimly envy.

To further announce her presence as the new Queen of Ghanaian music, the talented Eyeson has also released a well-directed ‘Odifour music video.

The “Odifour’’ music video which was shot in Ghana was directed by multiple award-winning music video director X’bills Ebenezer — whose background in illustration and visual effects means his videos are full of incredibly subtle tricks and motifs.

Eyeson,is a lover of life, and prefers to make people chirpy with her music and looking to reach an even bigger audience.