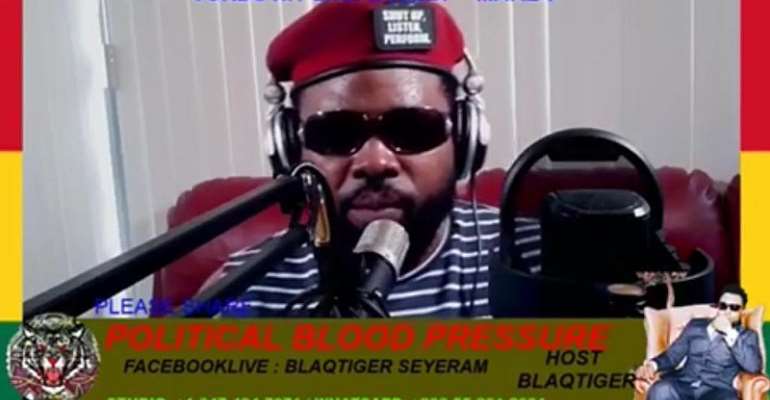 In the animal kingdom, Tigers are well known for their vociferous roars; to either give warning or alert its kinds. And when the other animals hear those thunderous reverberating sounds, some pay rapt attention to the message, while others shiver rigorously in their exoskeletons and search for their haven. Indeed, the rat does not perambulate the scotching sun without a course; and as a reminder, an anthropological calligraphic inscription on the resilient Fort Prinzentein in Keta tells its own ironic story that “until the lion has a historian, the hunter will always be a hero”. Truthfully, it appears Owusu Bempah’s spiritual horn at the Flagstaff House in Ghana has succeeded in casting deaf-and-dumb spell on our hitherto courageous “historians” and left them without a voice nowadays. Therefore, until men of “balls” start speaking against the perennial degradation of the country Ghana, the people will one day wake up to find their pillows in the neighboring countries as refugees. Hence, the incessant roars of BlaqTiger to remind the men on the steering wheel about the dangers of sailing against the tides!

Isn’t it striking, that in the avalanche of sophisticated and “glorified” corruptions, nepotism, injustices, insecurity, tattered economy and educational system; and in the wake of bleak future staring at the middle class and the youth, one could still hear aloud the deafening echoes of silence from the erstwhile ardent critics of previous regimes? Yes, today, in the abundance of fish and meat in the markets, the heads of civil society groups, opinion leaders and political provost-marshals have all become vegetarians! Need I say more…? That the phenomenon has de-innervated the moral structures and deeply ingrained into the conscience of well-meaning citizens and objects to the extent that even our cherished musical “Gadindim Boom-blaster” doesn’t even cough again. Instead of booming, it only glooms on the ridge when our Girls are being kidnapped; journalists and media houses are being shut down and more disturbingly, when the 1992 Constitution is being rendered topsy-turvy.

Who will say the truth?
In the midst of the higgledy-piggledy and elevated political blood pressure, a hero is commissioned and a savior is found in Toronto, Canada—BlaqTiger Seyeram! He is the fiercest, fearless, eloquent, and courageous young man with apolitical voice who champions good governance in Ghana and Africa at large. BlaqTiger is the host of the effervescence political talk-show christened “Political Blood Pressure” on his YouTube and Facebook handles. Behind the showbiz name “BlaqTiger” is another powerful name—Ex-Cpl Daniel Adome of the famous Ghana Military Police Unit at Burma Camp, Accra. With his security background, the “Ashaiman Boy” prides himself as a political vigilante and a pursuer of justice and equality. He roars from the den to expose the rots across the Black Continent. To many of his fans, his words pinch and pierce like a whole pineapple concealed underneath a dress, but only the bearer feels it! Certainly, there is no excuse for telling the TRUTH and in the studios of “Political Blood Pressure”, there is nothing like “with all due respect”. He calls a spade a spade, but not a “little spoon” because Tigers are precise, diligent, and purposeful and do not mince words on their prey.

Catch “BlaqTiger Seyeram” and his “Political Blood Pressure” show live on Facebook and YouTube channels. The Tiger is indeed roaring and trotting the grounds were many have feared to step in recent times. The sun is blazing but the Lion must begin to tell their untold stories to save Mother Ghana from going down the abyss.

SEARCH FOR HIM NOW…!