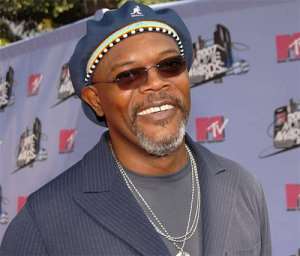 The 'Die Hard A Vengeance' actor has been touring some parts of Ghana, including places like Jamestown, Tema and others.

Mr. Jackson’s visit, according to sources, is part of the 'Year of Return, Ghana 2019', an initiative by the government of Ghana to mark 400 years since the slave trade started.

In September 2018 in Washington, D.C., President Akufo-Addo declared and formally launched the 'Year of Return, Ghana 2019' for Africans in the Diaspora, giving fresh impetus to the quest to unite Africans on the continent with their brothers and sisters in the Diaspora.

Late last year, during the festive season, a number of Hollywood personalities, including actors, musicians, photographers, among others, visited Ghana as part of a festival called Full Circle Festival, which is one of the activities of the 'Year of Return'.

Led by Boris Kodjoe, the group had others such as Michael Jai White, Anthony Anderson, Idris Elba and Jidena toured major parts of the country.

The new celebrities in town, according to sources, include Samuel L Jackson and Deborah Cox.

On Sunday, Samuel shared photos of some women going about their businesses on the streets of Accra to confirm his location in the West African country.

“The ride or die babies & the women handling their biz like always! The dancing babies & the tambourine playing nana were da best!! #homecoming #ghana #enslaveddocumentary,” he said underneath one of his posts.

Later, photos of him at +233 Jazz Bar & Grill surfaced online. Myjoyonline report on Sunday also quoted its sources for saying Samuel is in Ghana to shoot a documentary on slavery.

The documentary, 'Enslaved', Myjoyonline indicated, will be a six-part series which will be hosted by Samuel L. Jackson.