By Mustapha Attractive
Listen to article 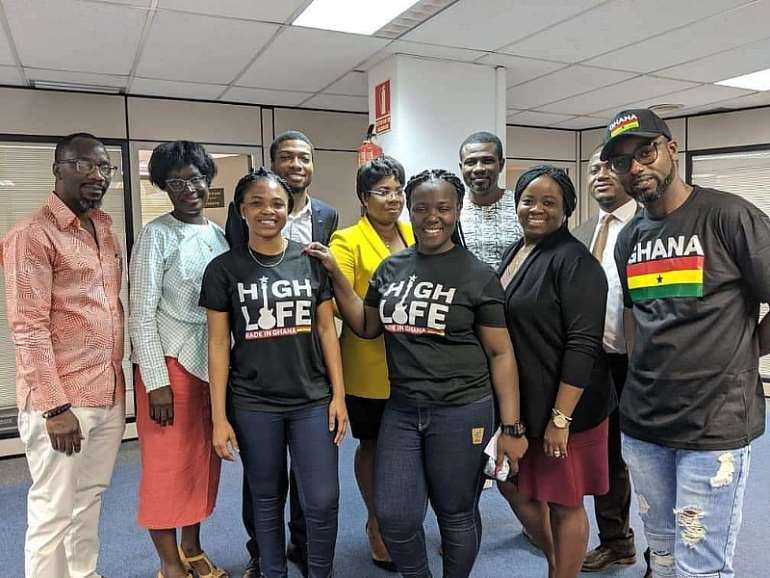 A group known as Youth Living in Torrejon,Madrid has denied allegations of demanding video tapes of a press conference held in Spain on 26th July, 2019 in the presence of Tima Kumkum of Adom FM a subsidiary of Multimedia Media in Ghana and some other reporters were present.

In a statement sighted online, the executives of the said group lament that it is a fabrication by some media men to sabotage Ghana's Ambassador to Spain Her Excellency Madam Elizabeth Adjei.

Below is the full statement;
RESPONSE TO THE ARTICLE WRITTEN AGAINST TIMA KUMKUM ON 1ST AUGUST 2019

We are privy to a certain online publication on social media, demanding a press conference tape from an Adom Fm reporter (Tima Kumkum) whom with her abled team, honoured our invitation to grace our press conference at Torrejon, Madrid in Spain.

SETTING THE RECORDS STRAIGHT
First of all, we the Executives of the Youth living Torrejon, Madrid representing the youth, would like to state emphatically clear that the said publication is misleading, malicious and should not be given any credence. There has been no demand for any Press Conference video tape from TIMA KUMKUM nor any of the officials from Accra who attended the Press Conference as being circulated on the social media networks.

Let us set the records straight. On 26th July, 2019 at approximately 4:30pm at Torrejon, a Press Conference was organized by some Ghanaian youth living in Madrid

But before we proceed on lets narrate how the whole thing started, the said Press Conference was organize by some Ghanaians youth living in Madrid with the aim of having a dialogue with Ghana Ambassador to Spain, Her Excellency ELIZABETH AGYEI to understand and resolve some few concerns bothering some Ghanaians communities in Madrid and its surrounding areas, which needed some clarifications

1. The press conference was organised by some Ghanaian youth living in Madrid and not all Ghanaians living in Spain as preposterously put out by the article.

2. Secondly, the allegations and threats for Tima to produce the video tape of the said press conference are all false and unfounded. We only invited the media team who had visit Spain on a different mission, to help us cover the press conference and take our concerns to the right quarters.

3. We would like the general public to note that we do not know whoever gave that false information to any media house to publish and demand video tapes. We have not authorized anyone among us to do so.

4. Rather, we engaged the press men around to channel our petitions and grievances to the Ghana Ambassador in Spain on some ambiguities surrounding their operations with us in Madrid.

This an attempt by certain individuals in Madrid who have collaborated with some Ghanaian media men to fabricate lies just to sabotage the good works of Madam Elizabeth Adjei.

It is rather worth mentioning that the effort of Tima and her other media colleagues have yielded a lot of positive results since the Ambassador has clearly stated that her doors are open to all Ghanaians living in Spain to run to when the need arises.

Furthermore, we want to reiterate any person(s) need any clarity or response on the output of the Press Conference, they should come to Madrid to engage our Executives going forward. This is because the Ambassador has listened to our petition and we have had several follow up meetings with her which has demonstrated her commitment to unifying and supporting all Ghanaian Citizens in Spain. This is an impressive improvement which we are well pleased.

The allegation against Tima and her media colleagues is unfortunate and anyone who is interested in this matter should contact the following Executives.