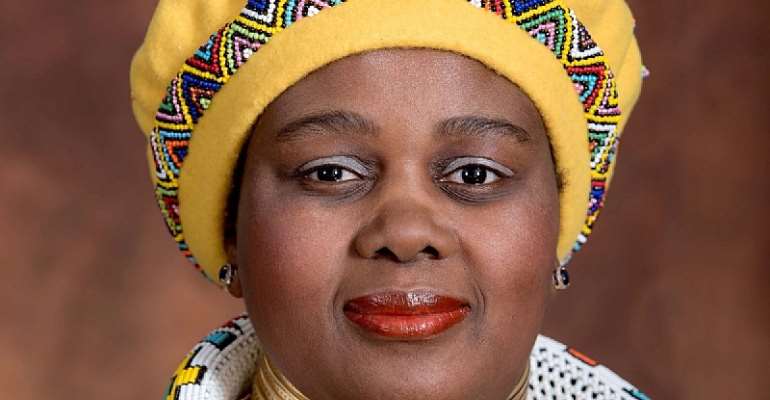 At age 17, Mmamoloko Kubayi-Ngubane was looking at a very low probability of success.

She was one of five children in an impoverished family living in a shack in Meadowlands Zone 10, Soweto, South Africa. Her mother was a domestic worker. She became pregnant when she was 17.

Fast forward to last week, on July 18 Kubayi-Ngubane was in New York representing South Africa at the Informal Meeting of the General Assembly, where she delivered South Africa’s National Statement on the occasion of the annual observance of the Nelson Mandela International Day.

The Minister met with the President of the General Assembly and the Secretary-General of the United Nations and participated in a series of activities in honor of Mandela.

In her speech to the General Assembly she reiterated Nelson Mandela’s belief that everyone, no matter from what background, can make a difference, and that every man, woman and child should take responsibility to change the world. Her own life is an example.

Armed with rugged determination and extraordinary intellectual gifts, Kubayi-Ngubane lifted herself from an extremely disadvantaged starting point to become a cabinet minister.

Today she is South Africa’s minister of tourism. It is the fourth ministry she has led, after the ministries of Energy, Communications and Science and Technology.

While she was a single mother, she earned a bachelor’s degree in psychology and sociology from Vista University (now the University of Johannesburg), packing the course of study into three years.

She earned a postgraduate diploma in project management from Damelin College and a Master’s degree in public and development management from the University of the Witwatersrand, and completed a Program for Leadership Development at Harvard Business School.

Somehow in the midst of her vigorous educational trajectory, she found time to work as a social organizer. Starting from the Youth League of the African National Congress (ANC) she worked her way up to becoming a Member of Parliament.

She was appointed to sit on the Global Artificial Intelligence Council of the World Economic Forum's Center for the Fourth Industrial Revolution where she works with other global leaders to provide guidance to the international community about shaping policies on artificial intelligence.

She has come a long way from her beginnings, but she has not left her roots behind. She wears them proudly. Her personal struggle is emblematic of the history of her country.

“That’s the story of South Africa, if you broaden it,” she told Travel Market Report. “Our country was facing not only colonization, like many others, but on top of that apartheid. To have to emerge out of that without war, through negotiations toward getting the country out of that system and making sure there was a democratically elected president gives us a unique legacy.”

Though South Africa is best known for its great environmental beauty and its amazing wildlife, the story of its struggles could be one of its biggest attractions.

“Our history is unique,” she said, “and today how we continue to manage a diverse society that has so many groups, many global cultures, but we are still able to have a nation. That’s South Africa.”

Staking out a Future

Not even two months into her new job, Kubayi-Ngubane is still in transition mode from her previous position heading the Ministry of Science and Technology.

The newly elected president, Cyril Ramaphosa, has set his targets, goals and priorities for his five-year term, and in the process he elevated tourism to the country’s number two priority, after manufacturing.

Ramaphosa wants to grow South Africa’s tourism arrivals to 21 million by 2030, more than double the current figure. In pursuit of that goal the tourism ministry is looking closely at brand management and at targeting markets where it sees potential for growth, including the African American market.

“America remains one of the critical markets, and Europe as well,” said Kubayi-Ngubane. “When we look at America we want to be able to more effectively penetrate the Black American market, to focus on the diaspora and what we see as potential for us. We have to refocus and see what we can do to attract them to South Africa as a destination.”

Another major concern of the tourism industry in recent years are visas and entry issues. The Ministry of Tourism wants free movement of tourists, but it has limited power over those policies.

“We are not responsible for visas,” said Kubayi-Ngubane, “so we need to work together with the Department of Home Affairs…Last week we announced some new visa-free countries. We want to make sure that people are moving more freely.”

The biggest task in terms of brand management, said the Minister, is getting the message out about what South Africa is really like.

“We need to be opening up and making people understand the country, communicating better about what South Africa is about and what type of a country we are,” she said, “because sometimes there is misinformation about South Africa.

A key message for South Africa’s marketing is that South Africa is endowed with a uniquely rich offering of diverse experiences for visitors.

And then there is the exchange rate between the rand and the dollar. The dollar buys a lot in South Africa. But the most important element of attraction in South Africa is the people. The South African tourism industry has seen that although most people first visit South Africa for the animals, they return for the people.

“I always say when you’re in South Africa you will be at home,” she said. “Because people will treat you nicely. You will never feel like you are very far from home. The challenge for us is to get them there the first time. Once you get to know South Africa you want to come back. Our challenge is getting people to make the first visit.”

One of the biggest obstacles against people making that first visit is misperceptions of South Africa.

“Perceptions are the biggest challenge,” she said.

He continued, “Some of it is in the nature of reporting. Sometimes we don’t get fair coverage. We are a democratic country and people are free to protest, compared to many nations that don’t allow that. When that happens it tends to be blown out of proportion.”

News reports sometimes create the impression that South Africa is rife with civil disorder, but that image is inaccurate, Kuyani-Ngubane said. And it will be the task of brand management to turn that image around.

“We have to be able to talk about who we are,” she said, “our history. If you understand the nature of South Africa, it’s typical of African people to be modest and not blow their own horn. But that tends to be a weakness in terms of selling product South Africa. We need to get out there and say, ‘This is who we are,’ to not be modest about who we are.”