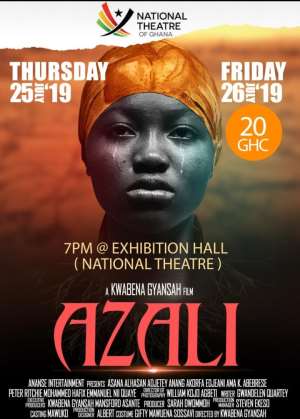 Management of Ghana’s National Theatre says all is set for patrons who will be trooping into its Exhibition Hall to catch a glimpse of the much-talked-about 'Azali' movie this week.

According to Management, the movie tells a thrusting story of a 14-year old girl from Northern part of Ghana who had her whole life ahead until a decision by the mother changed her fate.

The young lady was forced into early marriage and was sent to Burkina Faso by her husband on condition of working but the economic hardship made her escape without his knowledge.

Could it be a child smuggling syndicate? Amina after going through alot in Burkina Faso got rescued together with the other victims and were brought into an orphanage for resettlement to their various homes.

Though it was a wise decision, she had no option than to start over again enduring life's difficulties in the slums of Accra.

The one hour thirty minutes feature film has Dagbaani, Akan, Pidgin English as its film language.

Director by Kwabena Gyansah, the documentary kind of movie was screenplayed by Wanda Quartey with its production company being Ananse Entertainment.

The movie has characters such as Asana Alhasan (Amina), Akofa Edjeani as Rukaya, Ajetey Anang (Akatok). Mohammed Halfiz as Seidu as well as Ama K. Abebrese as Joan among others.

The movie will be showing on Thursday 25th July and Friday 26th July, 2019 at the National Theatre.