DJ Vyrusky plays alongside Meek Mill, Davido, others at ‘Oh My Music Fest’ 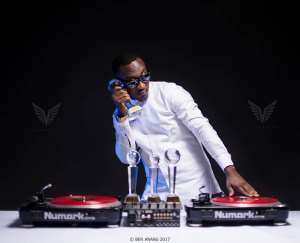 Reigning Ghana DJ Awards ‘DJ of the Year’, Vyrusky is on a mission to spread his turntable ‘virus’ across the world.

After successful stints in the U.S and U.K, DJ Vyrusky took the magic to the Netherlands.

He rocked thousands of patrons that gathered for this year’s ‘Oh My Music Festival’ in the city of Amsterdam.

Videos that have emerged from the concert has the disc jockey taking fans through an exciting musical drill at the Arena Park.

DJ Vyrusky did not only entertain patrons but projected Ghana by playing some old and new Ghanaian songs.

‘Oh My Music Fest’ is an annual event and regarded as one of Europe’s largest urban festivals.

The Festival gathered visitors from all around the world for a great party experience on Saturday and Sunday.

The music video for the song has already clocked over 1 million views on Youtube.

WATCH THE VIDEO BELOW: