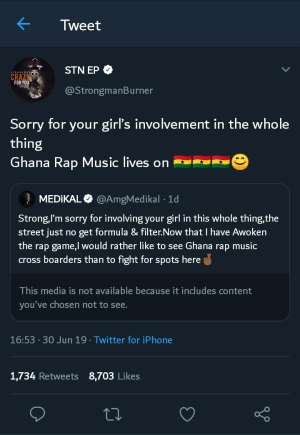 AMG Rapper, Samuel Frimpong popularly known as Medikal in Ghana’s music industry has finally apologized to the former Sarkcess signee, Strongman over the recent feud that ensued between them on social media.

According to Medikal in a tweet, he is sorry for involving Strongman’s girlfriend into his diss track.

In the tweet, he said “Strong, I’m sorry for involving your girl in this whole thing, the streets just no get formula and filter”

Weeks ago, the two Artistes took turns to beef each other by releasing diss tracks claiming supremacy. One of Medikal’s diss track went bad as some lyrics had insulting words in it. This got Strongman angry of which he also replied the AMG Rapper using unpleasant words.

Samuel Frimpong added that now that he has awaken the rap game, he would love to see ‘Ghana Rap’ cross the International borders.

“Now that I have awoken the rap game, I would rather love to see Ghana Rap Music cross borders than to fight for spots here.” he stated.

Medikal has however been seen retweeting some tweets from the handle of Strongman in which the former T.I Ahmadiyya student was spotted entertaining crowd at the recently held Music Magic Comedy (M.M.C) at the Accra International Conference Centre (AICC)

However Vincent Kwaku Osei also know in showbiz as Strongman has replied Medikal’s tweet saying “Sorry for your girl’s involvement in the whole thing Ghana Rap Music lives on.

Although it looks like the two Artists have smoked the peace pipe, some followers on social media expressing their mixed reactions says they don’t believe this ‘beef’ has died out.