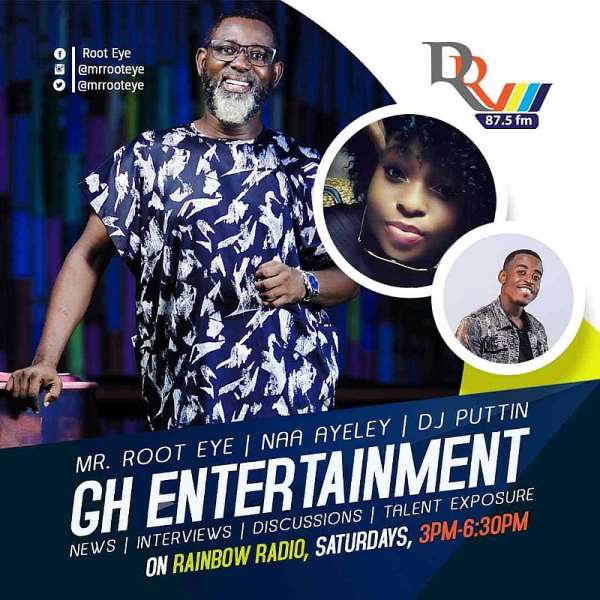 The multi-talented singer, the songwriter is taking over the show with vast experience in the media landscape in Ghana.

The award-winning host in an interview with rainbowradioonline.com said he is taking the over show with diligence and an understanding of what the listeners want.

He has promised to deliver his best and has asked his fans to keep on supporting him and his team to bring nothing but the best of entertainment on the radio.

Mr. Root Eye started his media career as a radio presenter with Skyy Power 93.5FM in Takoradi in September 1997 and took the western regional capital by storm and ruled the scene for the two years that he spent working with Skyy Power FM before he left for Kumasi to work with Ashh 101.1FM.

After working with Ashh FM between 1999 and 2005 he was poached by F. Giant Communications, operators of Fox 97.9FM when the company was setting up Hot 93.9FM in Accra.

After a year with Hot FM he left to set up Hyphaus, an advertising and PR Company that grooms and manages up and coming artistes. Some of the artistes he personally managed include “World Bank Music For Development Award” winner at the Ghana Music Awards, Reggy Zippy, KK Fosu and Mframa, to mention a few.

Root Eye’s radio experience in Accra includes a stint with Hitz 103.7FM where on two occasions he had to sit in for Blakk Rasta when the controversial reggae presenter who is also a musician had to honour an invitation to perform in the Netherlands.

He has hosted Music Music, a musical show on TV3 for several years.

He is credited for the crazy dance segment of the show.

You can catch Root Eye and his team on the Abelemkpe based Rainbow Radio on 87.5Fm from 3:00pm-7: 00 pm every Saturday.