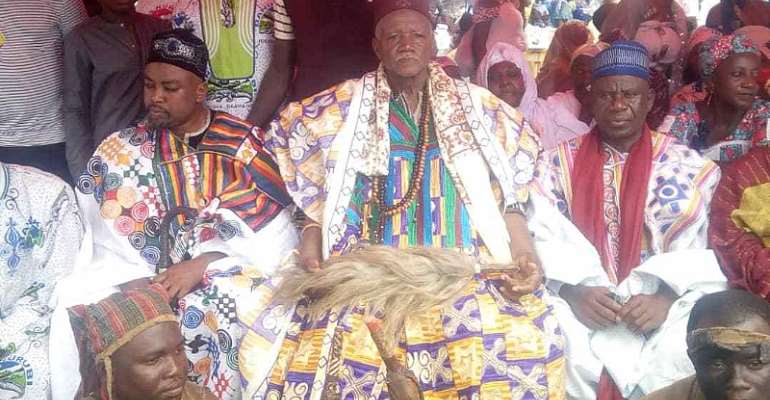 Thousands of people over the week converged at Wenchi for the celebration of the annual national Kurubi Festival.

The festival which is aimed at promoting tourism and mobilizing women for a peaceful national development brought together all the Banda chiefs and people who actively participated in all activities from 12th to 16th June.

The festival showcased the rich culture of the people of Banda as well as the way they dress and their staple foods.

The food aspect According to Attractivemustapha.com was fused into the competition were chiefs were asked to line up to taste the various kinds of meals prepared by selected native cooks after which the most delicious ones were awarded.

Women mounted the wooden platform to traditionally prove that they are faithful wives while given the opportunity for single men to pick their choice.

Ghanaian Actor Rahim Banda who is a native of Banda as part of his "Back to school from the street Project" donated exercise books to Imam Seidu school in Wenchi who gave their school out willingly as the venue for the festival.

The Member of Parliament for Offinso Constituency Hon. Ben Abdallah Bandah was present while the Second-Lady of Cote d'Ivoire sent representatives and contributions to make this year's edition a successful one.

The festival was organized by a committee chaired by Ghanaian veteran Producer Ahmed Banda, popularly known as Bandex.