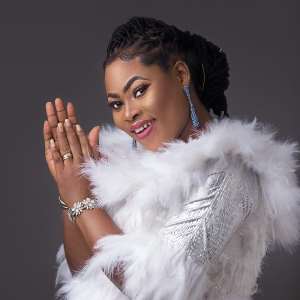 Multi award-winning gospel singer Joyce Blessing has fired at Christians who criticize her for putting on trousers while ministering or performing her songs on stage.

In a Facebook post yesterday 13th June, 2019, the Repent hitmaker explains why she sometimes puts on trousers during ministrations and not our Ghanaian outfit “kaba and slit” which have been suggested by some Christians as the most decent costume for female Gospel artistes.

She says due to her style of performance which is quite energetic she feels uncomfortable and not able to make moves during her performance in “kaba and slit” outfit.

Even though the singer has given a tangible reason as to why she puts on trousers, some fans still lambast her saying whatever the Bible has said about women wearing trousers is final and that she should not wear it at all, while a section of the fans also lauded her assertion.

Joyce Blessing was recently in the news for winning an award from Kenya at the 2019 Maranatha Global Worship Music Awards.

Sensitize School Children On Wearing Face Masks Before And A...
5 hours ago