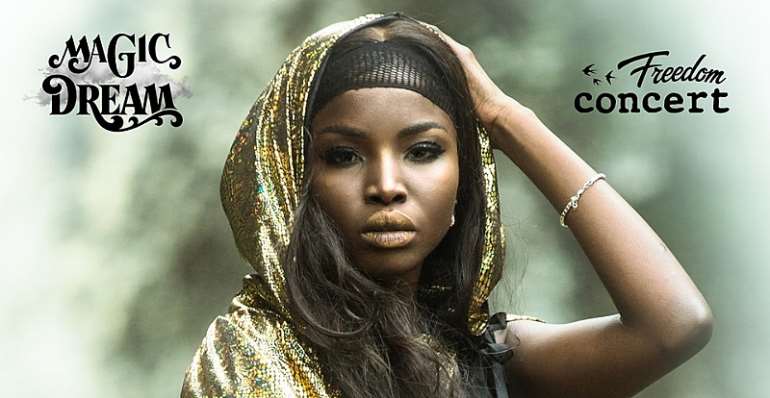 After a long wait, Lady Jay, the hard working female musician / entertainer is out with her latest hit song and video dubbed “Freedom”.

The video was premiered on 4Syte TV some few days ago and the media had an encounter with her.

Now is the time for the general public to see her sing and perform. Even Lady Jay herself cannot wait to meet her lovely and charming fans.

Now that the long wait is over, the biggest party we have worked really hard on for the past 4 months is almost here is going to be BIG!

Tickets are selling fast and seats are limited! If you think the Whitney Houston tribute was big wait till you see what we have in store this time! Reserve now on 0249749931 or 0244933339. VIP has better seating and fans. See you there!

Lady Jay is produced by Wahala Entertainment who are out to be the best of the best when it comes to entertainment production.

Zen Garden is the hottest place to be for good music, drinks and food. It's an ideal place for business contacts and exquisite for lovers. Its really an exciting place for people who want to see the nation's best artistes and also listen to good music and watch the stars on stage.

The 'Freedom' video has a beautiful message that can be seen through different symbolism and can be relatable to many events in Ghana today and throughout history.

Wahala Entertainment signed Lady Jay last year after she returned from Canada where she studied music business. Since then she released two singles and music videos titled “We Tried” featuring Ria Boss and “Let Me” featuring SSUE.

She has also been working on her famous live music show “Magic Dream” held at Zen Garden a few times a year.

Look out for her upcoming show “Magic Dream Freedom Concert” live Saturday, June 15 at Zen Garden in Labone, it is said to be one of the biggest events of the year!

Freedom was officially release in Ghana on June 1st. The international release on iTunes, Spotify, and all stores was on June 8th.

During the premieres exclusive interview with Lady Jay, she talks about her upcoming projects one of which is titled “This is Africa”.

It is said to be an anthem to all African people and is a song that she holds very close to her heart. “This is Africa” is set for release later this year and is going to be the biggest project both Wahala Entertainment and Lady Jay have ever worked on.

Atuguba Vows To Go To Court If Public Universities Bill Is P...
31 minutes ago