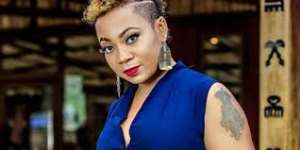 The founder and leader of Power Embassy Chuch, Prophet Prince Elisha Osei during a ministration was reported to have indicated that screen goddess Vicky Zugah has been cursed by a woman for snatching her husband.

According to him, "the woman found out what Vicky is doing with her husband approached her and warned Vicky. But Vicky rather called the man who picked her in his car and went to his house to beat the wife mercilessly."

Reacting to the Prophecy in a one on one interview with Halifax Ansah Addo on Okay FM's 'Best Entertainment' show monitored by ModernGhana on Monday, Vicky said the prophecy has affected her emotionally.

"Emotionally it has affected me because it's not a good prophecy and also people who do not know much about the issue are also reading different meanings into it," she said.

According to her, there were so many worse prophecies made about some well-known Ghanaians on the night but she doesn't understand why her's was being televised.

She further lamented that Ghanaians are quick to react when they hear negative stories about her but they ignore the positive ones.

"I was the last person the man called forward and prophecized to that day. There were worse prophecies made about some well-known people including some staffs of Peace FM but I don't know why someone chose to capture mine only," she said.

Meanwhile, the Prophet has debunked reports that his encounter with Vicky Zugah was staged.