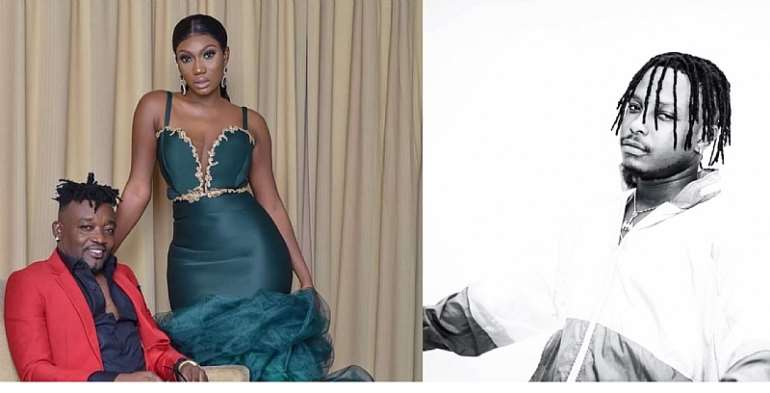 This incident occurred by way of humiliation to Wendy Shay when Kelvyn Boy moved at the artistes pace, immediately after the conference, to greet the pair for their reunion (Stonebwoy and Shatta Wale). Bullet with his signee, when he (Kelvyn Boy) rebuffed the “Uber” driver hitmaker in her attempt to hug him.

The captured scene which was splashed on various internet surfaces gandered some discursive reactions by some social media users and industry players about the peculiar conduct of the “Na You” crooner.

Though Kelvyn Boy has officially cleared the air it was not intentional, Bullet still disaccords, took to his official Instagram to express his deepest disappointment in the ‘Burniton Music Group’ signee.

According to Bullets, Kelvyn Boy acted in that manner purposely because he missed out the Vodafone Ghana Music Awards (VGMAs) new artiste of the year to Wendy Shay.

He had intended to proceed a new ‘beef’ with my artiste and also, to trend on varied social media platforms.

Bullet added that in all the numerous years he’s been in the showbiz industry, the impact and experience, he has never seen a man ‘beefing’ a woman all in the name of awards.

“I am glad to be part of this historical movement..As we are preaching peace and uniting people, Some artistes have started another beef just to trend.I have been young but now I’m old and with my experience in this industry, I’ve never seen a man ‘beefing’ a woman all in the name of awards. Happy Eid Mubarak. #letpeacereign #wendyshay4eva” he wrote.

Bullet is believed to have played a key role in the joint conference which happened at the Marriot Hotel on Tuesday, June 4, 2019 was organised by the Kofi Abban Foundation.

Facilitated by Nana Aba Anamoah, the vibe from the two artistes were that of humour and harmony, a direct opposite reaction observed on the 18th of May when the fracas occurred.