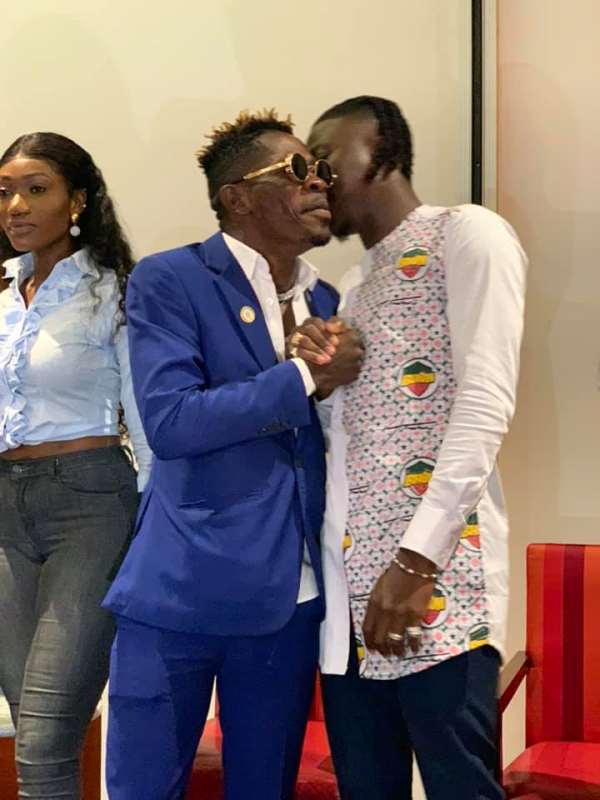 Shatta Wale and Stonebwoy held a joint press conference on Tuesday, June 4, 2019, at the Marriot Hotel in Accra.

The Press Conference was to make public their union and to announce plans in the offing for the two as well as clear the air on an impending unity concert.

The two artistes who have been banned from Ghana Music Awards (VGMA) made their followers aware that they have trashed their differences and are coming together to push music in Ghana.

However, this portal has sighted a photo of the two dancehall artistes and Wendy Shay at the press conference.

In the photo, the two celebrated dancehall artistes are seen whispering to each other’s ears while the ‘Discovery of the Year Winner’ at the 2019 VGMAs, Wendy Shay is also seen standing behind them.

Ever since the photo surfaced online, social media and the general public have gone agog, asking whether Shatta Wale and Stonebwoy were gossiping about Wendy Shay.

Shatta Wale has also said he’d love to marry the 'Bedroom Commando' hitmaker because she is obedient— so it’s quite unclear what may entice Shatta Wale to gossip about someone he craves to marry?

Well, all attempts to reach managements of Shatta Wale and Stoebwoy to ascertain the truth of the matter proved unproductive.

See the photo below and be the judge
Source:RazzNews.com