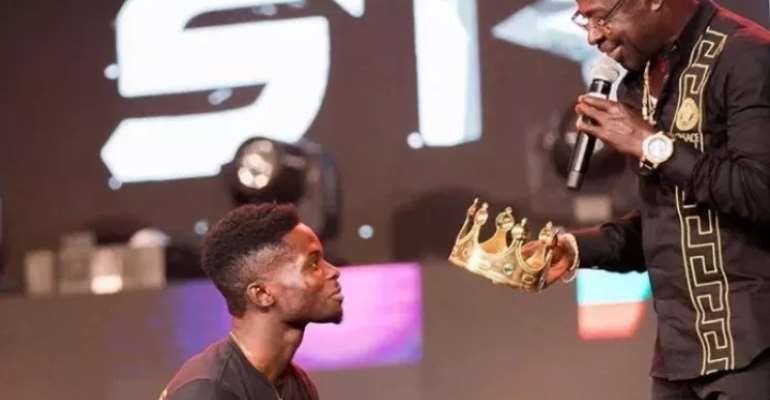 Weeks after the 20th Vodafone Ghana Music Awards (VGMAs), the awards ceremony is still in the news over happenings on the night.

Amongst things that took place on the night is highlife legend Amakye Dede praising Highlife Artistes of the Year Kuami Eugene for his talent and crowning him ‘Highlife King’.

Following the crowning, there have been criticisms from entertainment pundits that it was out of place for the highlife legend to do so.

While others argued Kuami Eugene does not deserve to be Highlife King, others say Amakye Dede could have chosen a better platform to crown the young artiste.

It is on the back of these criticisms that manager of Amakye Dede says his artiste crowned Kuami Eugene against his will.

Reacting to the issue on Anigye Mmre on Onua FM, Akwesi Aboagye said what happened on Saturday, May 18 was not part of his artiste’s rehearsed act.

“KiKi Banson, who was in charge of artiste repertoire for this year’s VGMAs, called to inform him that as part of Amakye Dede’s performance, they want him to crown Kuami Eugene and I told him I have to speak to my artiste about it.

“Amakye Dede was not in support of it when informed him, so I was surprised to see him act against his will,” Mr. Aboagye explained.

According to him, he got the news later since he wasn’t at the event.

He said when he questioned Amakye Dede, the artiste said he was persuaded by Kiki Banson to crown the young artiste.

Mr. Aboagye noted that Amakye Dede still declined the offer despite the persuasion, but he was ‘ambushed’ on stage when a crown was given him unexpectedly to be put on Kuami Eugene’s head.

“So those who watched that act will know that something was not right. According to Amakye Dede, he was surprised to see a lady walk on stage to hand over a crown to him,” Mr. Aboagye narrated.

Even though people have said Amakye Dede should have declined that act if it was not in his interest, others too have argued that the organizers of VGMA must apologize to Amakye Dede because they ambushed him.