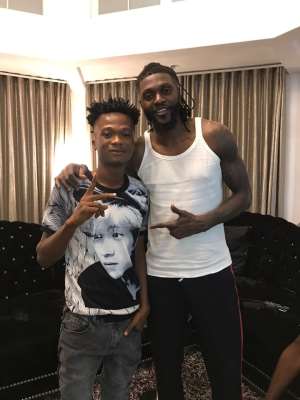 Togolese and African soccer icon, Emmanuel Sheyi Adebayor, has admonished new music sensation, Imrana, not to forget those who are supporting him today, if he succeeds in future.

The Togolese legend advised Imrana to always stay close to those who are with him now as those are the true friends he can rely on. “Do not forget those who are struggling with you today. Keep every promise you make to them because they are your true friends”, he added.

Adebayor gave the advice to Imrana when the rising singer paid a visit to him at his residence in Accra.

Imrana, whose single track, “IMAGINE SAY”, went viral after he cried in a video rendition of the song, has been on a tour of the Capital recently.

The young talented musician from Sunyani has been touted as one of the future stars who is going to take the Ghanaian music industry by storm, has also met legendary musicians like Samini, Sarkodie, Stonebwoy, among others.