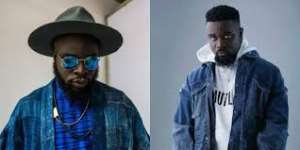 Rapper M.anifest has jumped to the top of the social media trends in Ghana after releasing a diss track which fires a string of salvoes at Rapper Sarkodie.

Even though no names were mentioned in the track, all indications prove that ‘Rapper 101’ is directed to Sakodie, mainly because some lyrics in the song indicates some happening the rapper has been involved in.

In the song, he talked about King Sark claiming to be the Highest but has weak vibes.

We don’t know whats actually going between them. It's yet to be known.

Part of the lyrics reads:
And you got the deepest pockets
your money won’t fit in wallets
Thug of all things and boss of all bosses
All you do is win
You die you never take losses
Rapper 101
M.anifest, you are in deep trouble!
Source: Celebritieskasa.com

Reopening Of Schools: Not Testing Students, Staff Dangerous,...
46 minutes ago