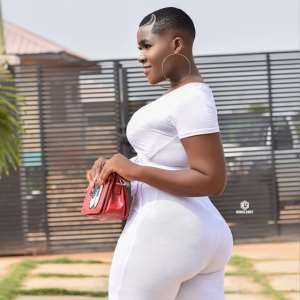 Ghanaian actress Abena McKenzie, has said the indefinite ban on Shatta Wale and Stonebwoy by Charterhouse, organizers of the Vodafone Ghana Music Awards (VGMAs) is harsh as the duo’s brawl at the 20th edition of the VGMA was just a stage play.

"I think the sanctions are just too harsh. It looks like Charterhouse is lost, it was a stage play, this always happens in the reggae dancehall business, and it's common in Jamaica", she said.

"They will loss unless they bring the two back, tell me apart from Sarkodie, which other artists can we say has a huge following like Shatta Wale and Stonebwoy?", she asked.

Charterhouse on Thursday indefinitely banned the two rival dancehall artistes for brawling at the 20th edition of the VGMA.

Chaos erupted at the event when Shatta Wale and his team attacked his arch-rival Stonebwoy on stage when the latter was announced the ‘Reggae/Dancehall Artiste of the Year’.

It was a free-for-all fight on the big stage as the two sides clashed forcing Stonebwoy to pull a pistol.

“There is no reason why we should let these two gentlemen hold us back in our development of music,” Board Chairman of the 2019 VGMA, Amanzeba announced at the press conference.

He said the Board deemed the actions of the duo to have flouted awards scheme’s terms and conditions, bring its name into disrepute and that apart from the indefinite ban they are stripped off all awards they had won at the 20th VGMA.

By that they are “requested by the board to return all plaques in their possession to Charterhouse effective immediately."

Former Member of Parliament for North Dayi, George Loh said stripping the two dancehall heavyweights of their awards changes nothing.

“Manager of the artists must be more responsible. Organizers must take security very seriously when putting together events,” he intimated.

A member of the communication team of the governing New Patriotic Party (NPP), Richard Ahiagbah called on the two artists to “spare us”, describing their actions at the awards night as “totally shameful.”

The two musicians should know that there are so many people producing very good music too. Having the privilege to be nominated or awarded doesn’t make you too special,” he said, asking “Where from this dancehall?”

According to him, “We have our kind of music as Ghanaians. This genre of music is bringing up some behaviour that does not represent us as a people. They should promote our culture through their music. If they won’t do that, we don’t need them.”

Meanwhile, the two artists were arraigned before the court Wednesday and granted bail in the sum of Gh¢50,000 each for the chaos that marred the awards night.

The court also cautioned them to be of “good behavior during the pendency of the case” before it, a statement from the police said.

They had both been charged with offensive conduct while Stonebwoy has an additional charge for displaying a weapon in a public place without permission.

They pleaded not guilty to the charges and the case had been adjourned to June 20, 2019.

Reopening Of Schools: Not Testing Students, Staff Dangerous,...
38 minutes ago