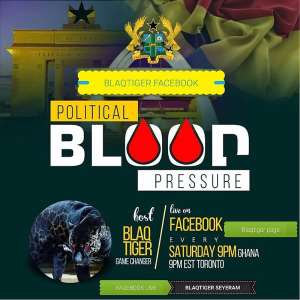 Ahead of the 2020 General Elections in Ghana, Ghanaian and Canadian based Social Development and good governance commentator, BlaqTiger Seyeram, has introduced a hot political show meant to serve of Ghanaians in the Diaspora and Social Media followers.

BlaqTiger grew up in some of the toughest communities of Ghana. Growing up, BlaqTiger spent part of his young years in the streets of Ashaiman, Tema and Nima.

During his youth days he bore the knickname "Red Scorpion" as a household moniker but on campus he was popularly known as "MC Quick".

Lost in his vision and love for Ghana, faith and destiny delivered BlaqTiger into the hands of some of the finest military officers of the Ghana Arm forces. After being weaponized as the best asset, he passed out as one of the best soldiers ever to serve as a Ghana Military Police comrade. For his intellectual sharpness, bravery, confidence and supernatural strength, BlaqTiger was stationed and he served at the corridors of power.

Knowing he has a lot inside him to deliver, he decided to become one of the roots of the Ghana Arm forces as a Physical Training Instructor, but overtime BlaqTiger's vision, his love for Ghana and his patriotism begun to put him against the colonial manner in which the service personnel are handled.

As a vocal person with a revolutionary mindset, his call-for-change speeches and ideas were putting him into the political arena [ seemingly anti-authority situation that might tag him as a soldier with an unruly militancy], so BlaqTiger resigned and left the shores of Ghana to rediscover himself and he ended up settling down in Canada.

BlaqTiger's compelling political zeal resurfaced later and for some time now he's been back in the spotlight again as a GOOD GOVERNANCE ADVOCATE, one that boldly calls out the bad leadership in Ghana without fear or favour. Eventually, BlaqTiger took to social-political commentary through which he has become the host and face of POLITICAL BLOOD PRESSURE, the number one Ghana-based political talk show in Toronto Canada and North America as a whole.

BLAQTIGER is on Facebook as Blaqtiger Seyeram. Some of his followers call him the "Roaring Tiger. His followers have the massive belief that if he continues roaring at the political ills that have plagued Ghana, he will awaken the country's youth and empower them with some degree of revolutionary strength to help them stand and protect what is left of mother Ghana for the next generation.