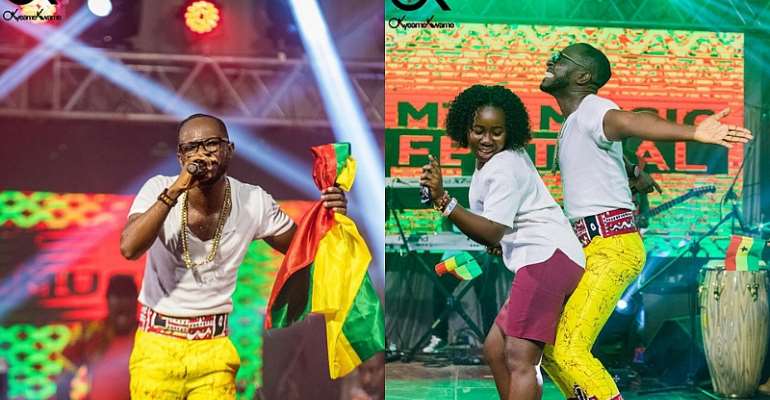 Patrons of the MTN Music Festival which was held yesterday in Kumasi were awed by Okyeame's spectacular performance.

Some people who were at the programme took to social media to express their admiration of Okyeame's stagecraft.

Typical of the 'Made in Ghana' ambassador, he performed with a lot of energy, dishing out back to back hits.

Clad in yellow pants, Kimono, white sneakers, he got a roaring applause as he came from the audience when he was introduced.

Her performed with style and perfection.

The audience could not help but be on their feet throughout the one-hour performance of songs like 'Versatile,' 'Sika,' 'Anaa,' 'Woara', 'Bolgatanga' and 'Woso'.

The MTN Music Festival held on Tuesday at the Golden Bean Hotel in Kumasi also featured Sarkodie and Rex Omar.

Okyeame Kwame recently released his 'Made in Ghana' album which is available on Aftown.

The 'Made in Ghana' album is to highlight the virtues of all groups of people in Ghana across the various regions and to also encourage Ghanaians to be proud of their culture and heritage.

The songs represent the various regions in terms of concept and the artistes featured.