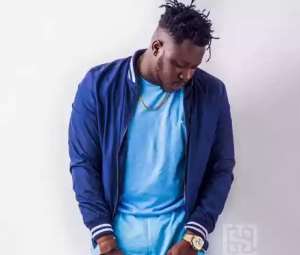 As early as 3:00 pm, enthusiastic students of Sunyani Technical University had begun trooping into the venue of the event dubbed, 'Club Shandy Block Out Party'.

Before opening the stage to the rich line up of the Club Shandy Block Out Party, as tradition demands, gave space to some stars of the future to showcase their talent to a highly indulgent audience which will give them the needed encouragement to hold on to their dreams and seize the vast opportunities the future holds.

The stage looked colourful and lighting effects looked great! There were thrilling performances, such as Dance performances, whereas the baddest Disk Joker; Dj Aroma finally kept the stage on fire as he was mixing the songs from one genre to another.

Things were moving faster, One of the high points of the show was the moment Medikal mounted the stage to perform, sparking off loud cheers from fans who were delighted with his entry.

Medikal treated the audience to exceptional lyrical vibes one after the other. The stage and sound were well on point throughout the event with only the microphone proving to be the black spot.

But after the night performance of “Club Shandy Block Out Party” at STU Campus, also highlighted a seemingly intractable problem.

On that same night, the Omo Ada hitmaker and the award-winning stage star was frustrated by an audience member as his cell phone and the diamond chain was snatched from him offstage.

However, he was able to retrieve his cell phone, while the chain was no were to be found. Medikal spent closely to 1hr after his performance trying to retrieve his chain. Several witnesses hailed Medikal’s actions.

Well, one may also ask why will Medikal of his calibre go searching for his chain? According to a close source for the show revealed to us that, the diamond chain is wealth $250,000.

Medikal together with his manager "Flodelly" got so furious about the incident which made Flodelly got someone slapped in regards to the thievery issues. Medikal however, left the premises without his precious diamond chain.