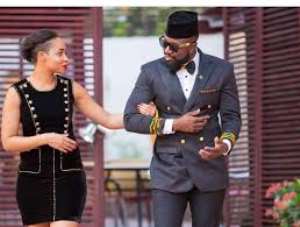 Zimbabwean socialite, Pokello Nare has disclosed that she divorced Ghanaian tailor and actor Elikem Kurmodzie because he wasn't ready to be a husband.

In an Instagram post few hours ago, Pokello for the first time threw the challenge at her fans to ask her anything they will like to know about her, a fan asked the former Big Brother Africa star why she broke up with her ex-husband Elikem and Pokello replied that Elikem Kumordzie was not ready to be a husband.

She further disclosed that after four years of trying to be patient with all his transgressions, she later realized that she had to move on because Elikem was not ready to change.

The fan also asked the current relationship between herself and Elikem and she said; "I think we cool now, some days are tense, but I think it will get better. He has kinda seen the light in the past few months so he is trying to be better" Pokello said.

It is unclear if Pokello's reply to the second question has it that the two are now cool with each other and hoping to be seen together again since Elikem has now seen the light as she said.