Shatta Wale Threatens To Slap Aka Blay In A Tweet 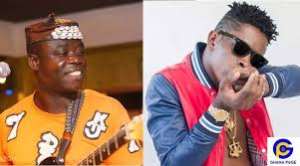 The Shatta Movement boss in a Twitter post threatened to slap the veteran musician if they ever meet and described him as a poor artiste with poor mentality.

The ‘My Level’ hitmaker also described Aka Blay as a ‘jealous nigga’ and rained insults on him.

“I wish certain things gh artiste deh talk they can say it in my face ….Like the slap dem go chop … poor industry with poor mentality …Alka blay if I meet you and you don’t tell me wat u said.. U go see slaps and get that hype Aboaba jealous nigga..”

The veteran musician in a recent interview stated that Shatta Wale has a negative impact on the youth.

According to the ‘Take Away’ hitmaker, Shatta Wale has a huge fan base and must use his influence to affect the youth positively.

“With his large fan base, I don’t expect Shatta Wale to use certain words and engage in indecent acts. I know he has the largest fan base in Ghana at the moment but what impact is he making on them?

The youth are engaged in all sorts of bad activities because they see him as their role model and blindly copy what he does. I expect a lot from him as the leader he claims to be because the youth are going wayward and I will blame it largely on him”, he stated.