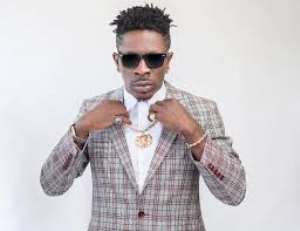 It was a night of bliss and fireworks at the Commonwealth Hall Artist Night on Saturday night when Dancehall king, Shatta Wale mounted the stage and performed for hours nonstop.

The controversial musician arrived just on time at the Commonwealth grounds at the nation’s premier university, University of Ghana, to a packed house numbering hundreds of people who witnessed another history in the making as Shatta single-handedly performed his back to back songs.

Despite receiving a bad sound at the initial stages of the performance, the musician did not back off or complain as was expected of him rather he kept performing till the sound got better, that was when he set the place ablaze performing his hit tracks.

There was total chaos up front when the award-winning act sprayed one thousand cedis into the crowd as he performed his hit track, How much be your amount’. After the dust settled, Shatta hilariously demanded his money claiming it was his last pocket money.

An event which was supposed to be an entertaining night ended up becoming an all-night service when Shatta started praying and declaring wealth to the lives of his fans. An elated Shatta invited two die-hard Shatta Movement (SM) fans on stage where he declared wealth into their lives and charged his support base to establish an SM support base on campus.

Overwhelmed by the love of the highly charged vandals the Kakaihitmakerr finally gave up and conferred himself as a proud associate member of the Commonwealth hall by wearing the Vandal strap.

Shatta performed hit tracks spanning from Ayo, Taking Over, Wonders, Forget, Thunder Fire, Gringo, Mahama Paper and any many others. The SM president performed My level before calling it a night with only a few minutes to daybreak.

The only surprise act on the night was Wendy Shay, who also served the fans to great music.