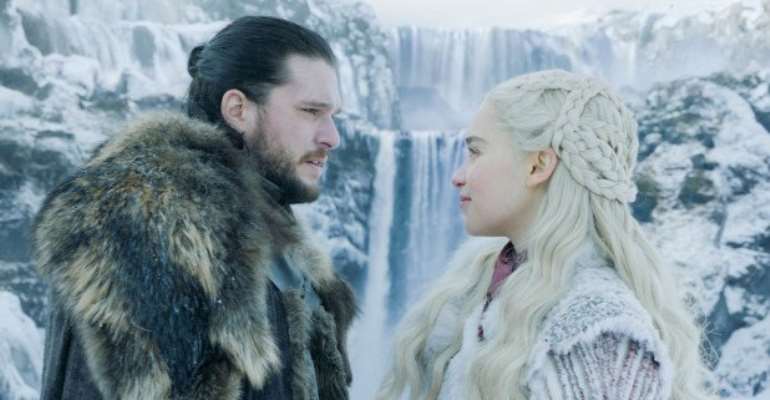 “Game of Thrones” fans, always on morgue alert, can simply relax for one week.

Nobody died in the Season 8 premiere. One major murder would have been a sensational way to kick off the series’ final six episodes but director David Nutter and scriptwriter David Hill mostly played it safe in this table-setting episode, using the first hour to gather the various armies that hope to attack the Night King, whose destruction of the Wall at the end of Season 7 was one of this show’s most amazing sequences.

The arrival of Jon Snow (Kit Harington) at Winterfell is both a homecoming for the beloved King in the North and a reckoning, with Daenerys (Emilia Clarke) at his side, that the power dynamics have shifted. Hill efficiently establishes Sansa’s (Sophie Turner) instant distrust of the Mother of Dragons and Dany’s realization that, unlike the easily led Jon, Sansa is unlikely to “bend the knee” to the queen. This rivalry should drive future episodes as Jon’s girlfriend and sister keep a wary eye on each other.

The best surprise of the hour came during a scene when Sam (John Bradley) meets Dany and Jorah Mormont (Iain Glen). She feels in Sam’s debt for finding a miracle cure for Jorah’s greyscale and he admits that he stole a few books from the Citadel so he might need a pardon.

When it comes out that Sam is the son of Randyll Tarly, she reveals that she was forced to execute his father and brother Dickon for refusing to accept her as their queen. A shaken Sam leaves them and then runs into Jon, and the news comes tumbling out: the revelation of Jon’s true parentage and that he is true heir to the Iron Throne.

It was smart of “GoT” to address Jon’s origins in the first episode, but who would have expected Bradley, always a supporting player, to carry the killer moment audiences were waiting for? He gave a better performance than most of the leads, and now the show has a platform to build on. Snow finally has the ammo to become the ruler of the Seven Kingdoms. The remaining five episodes will reveal if he has the brains to seize his moment.

The episode’s other centrepiece was a thrilling dragon ride taken by Dany and Jon Snow over the mountains of Winterfell, the equivalent of a first date. The blossoming romance between these two charismatic figures will send fans to Westeros heaven, but the growls from a jealous dragon as Dany and Jon kiss warn of problems ahead.

If her submission to Greyjoy’s carnal urges seems like a mistake, she must have her reasons. Many fans predict her demise but it’s hard to imagine her not being able to finish off some of her enemies first. Otherwise, why would the show introduce a handsome new crossbow as a weapon for her to use against Tyrion (Peter Dinklage), whom she has wanted dead since he killed their father, Tywin (Charles Dance), with another crossbow?

Having established where all the major players stand, Hill and Nutter touch upon some secondary relationships: a new flirtation between Arya (Maisie Williams) and Gendry (Joe Dempsie) as she asks him to forge a new weapon for her, and a possibly dark encounter between her and The Hound (Rory McCann).

The best of these was saved for last, as Bran (Isaac Hempstead-Wright) announces, in Hannibal Lecter fashion, that he’s “waiting for an old friend” and finally, Jaime Lannister (Nicolaj Coster-Waldau) gets off his horse at Winterfell. The shock of what he’s just walked into played splendidly across Coster-Waldau’s handsome face.

Going into the home stretch, “Game of Thrones” has nothing to prove. It has won 47 Emmys — a record for a scripted series — and will leave a permanent mark on the culture. No other series has gone to such imaginative, narrative and financial lengths to realize its vision. Sit back and eat it up. It will all be over before you know it.