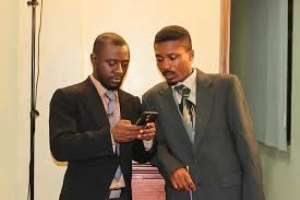 Even though he was also nominated in the same category as Clemento Suarez, Richmond makes the point that he feels that his ‘fooling’ partner on screen deserves the award more because he is the Superman of Ghanaian comedy.

The ‘New Discovery’ award-winner at last year’s Ghana Movie Awards also emphasized that over the years, awards schemes have failed to honor Clemento Suarez even though he has been in the pole position to pick up certain key awards in past years.

Lawyer Nti called on Ghanaians who love comedy to try and make a statement with the Ghana Entertainment Awards USA 2019 by voting massively for Clemento Suarez to win in the category of ‘Best Comedian’ because “Nigga has been slept on for too long."

“Fam, let’s do this for the Superman of GH comedy @clementosuarez, my brother and my mentor. When the time comes to vote, please let’s all vote for @clementosuarez.

"He deserves to win this and more. Nigga has been slept on for too long. Let’s make a statement with this one. Congratulations to all the nominees. Thank you @geawardsusa for the recognition," he wrote on his Instagram handle.