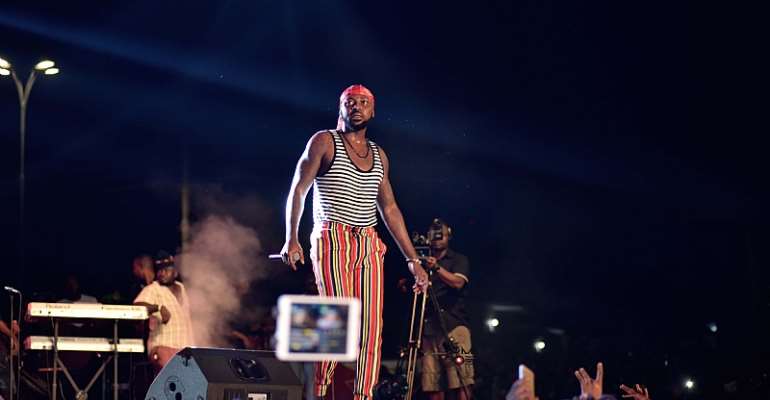 Hiplife artiste Ponobiom, known as Yaa Pono shocked fans and patrons at the Vodafone Ghana Music Awards Nominees Jam recently held in Kumasi after he used vulgar words and also knocked down two fans who attempted to touch him during his performance at the event.

Right before Ponobiom appeared on the stage, there was a crowd surge very close to the stage which called for additional security men to 'beef' up the available number of guards offering security services for the event .

The extra security came to help for calm to be restored at the programme after a near stampede that was caused by fans who had moved near the security barricade between the stage and the audience due to over excitement and subsequent attempt to get closer to the performing musicians and touch them.

The organizers According to Attractivemustapha.com acted swiftly to avert any chaotic occurrences after going through a tough time to control the crowd and ensured continuity of the programme as planned.

The unfortunate happenings lead to technical hitches which prevented the 'W'asueme' hitmaker Obaapa Christie and sensational Adina who were billed to entertain fans from performing.

One would have thought that considering the tough time the fans had given the organizers, no musician would attempt breaking the security rules, but hiplife Musician Yaa Pono who thrilled fans with a cheerful performance full of energy shocked fans.

The hails and ecstatic response from the crowd obviously boosted his strength and pushed him to jump into the crowd which had hitherto been blocked from nearing the stage to ensure artistes safety when he was performing his 'breakthrough' hit 'Obiaa Wo ne Master'.

Few minutes after entering the crowd, he started struggling which prompted a fan to carry him on his head for his safety, Yaa Pono was heard saying 'you are a fool' in the local dialect and later knocked down some fans amidst some kicks which made the carriers send him back to the stage.