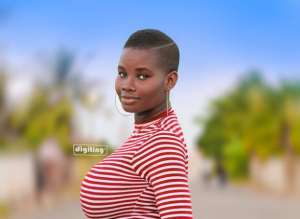 Ghanaian Social Media model Pamela Odame Watara, has revealed that she is consistently being harassed by Ministers, Members of Parliament (MPs) and renowned footballers over her big boobs.

She revealed that some of them have personally send her messages requesting she gives them an opportunity in return for $1,000 dollars but she turns them away because she is not a commercial sex worker.

“I am being harassed by a lot of men because of the size of my boobs. Sometimes people offer as much as $1000 just to have a feel. If I show you text messages as well as whatsapp messages you will be shocked. These are popular and respectable persons in Ghana including two politicians, MPs and footballers”, she revealed.

She added that; ”these are MPs and Ministers but I have not yielded to their demands because I have a boyfriend. If they will give me the amount for free, I will gladly accept but in return for my boobs, it is a big no”.

Pamela disclosed that she is interested in someone older than her and can direct her.

“I need someone who is about 10 or 15 years older than me. I need men not boys. I met my boy before I met NAYAS”, she revealed on Adom Fm.