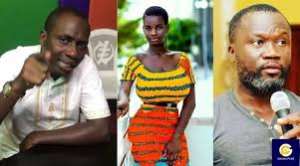 According to Counselor Lutterodt, it was very wrong on the part of Pamela Odame to use such indecent words on the radio personality.

The Counselor also advised Pamela Odame to retract her words and also apologise for her indecent behaviour.

“I think Pamela should retract the wrong words she used on Ola Michael. If you don’t agree with Ola on certain things you don’t come on air and use such loose language. Pamela must retract the insult she said and apologize and leave the studio”, Counselor Lutterodt stated.

The Instagram slay queen recently hurled insults at Ola Michael after he exposed her of not being a student of Wisconsin University.

Pamela disassociated herself from the viral video claiming she recorded a similar video but never masturbated.

However, the statement by Ola Michael infuriated Pamela which caused her describing him as foolish and stupid and other unprintable words which are not allowed on air.