I am Following the Footsteps of Osei Kwame Despite - Kulli Jay 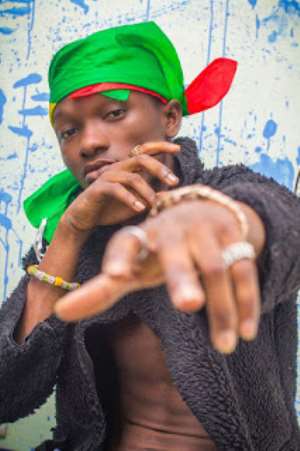 Kelvin Osei Owusu is the name. Music stage name "Kulli Jay". Born in October, 11th 1993. Raised in Kumasi, Ashanti Region. Live with parents all his lifetime. He spends time moving around showing people his music skills from childhood. He started music from childhood where he picked the feeling from music by dancing in school days but never had the chance to try the music with the microphone.

Kulli Jay attended Junior High School at Kings International School in Ashanti Region, senior high school at Assemblies of God Senior High too at Ashanti Region. He has been singing and recording so many songs from school time. He completed senior high school in 2013, since then he's been running up with his music steps but due to challenges, it has been a tough journey for him to break through the music scene.

He's got so many great songs you won't regret checking out. Due to hardship in Ghana music around Ashanti region area, he's not been able to get a label yet but he is been with a well-registered team founded by him called "FEEL DA FUN EMPIRE".

He wishes big step for himself and for his music to penetrate across the world. So he made mention of some people in music and outside the music who motivate him to be what he wants to be in life about his Music and outside music.

He made mention of popular billionaire "Mr Osei Kwame Despite" who has been motivating him all his life from childhood how he has been running up his hustle to achieve his goals as a Billionaire and employing people to get what they want in life. Kulli Jay's dream is to be rich someday and follow the footsteps of Mr Osei Kwame Despite because he's seen the hustle and hardship in life so for others to live in poverty and die with poverty he prays God to bless him like Osei Kwame Despite for him to help people someday. He made mention a lot of lifestyle about human being that is the ungrateful part and grateful part if you treat human well in life. He's seen it all and added in a song for this honourable rich man. Secondly made mention of Nigerian music art, Wizkid who has been making waves with African Music across the world. Wizkid has been his motivation even he started singing before Wizkid but he's got motivation from him. In Ghana, he made mention of Richie the C.E.O of Lynxx Entertainment who is currently the producer of the young arts, Kuami Eugene, Kidi and MzVee. Around the world, he mentioned Puff Daddy who is American RnB Hip-hop artist.

Kulli Jay used these people to motivate his life to push hard for his music. Kulli Jay has unsigned artistes who look for any well-structured label to help direct and push his talent worldwide. Talent over media hype vocally. Ghana, Africa and the World should check out for him because he's got versatility in music. He's got a new song out which he is writing a letter with a song to the popular Billionaire in Ghana here called "Osei Kwame Despite."