JH Kwabena Nketia: Some Muses Of The Musical 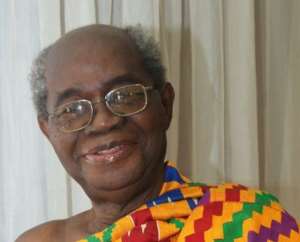 JH Kwabena Nketia’s humility, upon all his greatness, was arresting and it knew no differentiation. His passage is a huge cultural bereavement for even the Philistines. I had many interesting discussions with him on music and the Gold Coast social life of the 1950sand ‘60s.

These were mostly at the old offices of the Institute of African Studies, Legon and occasionally at his home with each encounter, having its own gentle underlining.

Though the new Institute- Kwame Nkrumah Complex has its main hall deservedly named for him, he concentrated his efforts building the impressive JH Nketia Archives at the old site until two weeks before he passed on.

After visits, he would see me off to the car park, an old Akan traditional practice not normally extended by the aged to the young. It would be when my car engine started that we would end our conversation. On one such visit, he remembered what he said he always wanted to alert me to but would forget: the office arrangement in the 1970s.

He showed me where my father, a research associate’s office was and their good mutual friend, Ivor Wilks, my godfather, a Welsh and British philosopher-historian from Cambridge who had come to the University of Ghana. Wilks worked with Thomas Hodgkin and Kwame Nkrumah (and others) in building the Institute of African Studies. The three offices in Professor Nketia’s nostalgic pep-tour were next to each other and their research interests the same in the main- history and in his case, of ethnic music as core.

The three, he did not tell me this though- were the only child of their parents. My father passed first in his 70s and Wilks, who ultimately retired after Oxford and as emeritus professor at the Northwestern University in Evanston, in the United States, followed in his 80sgiving in 1996, the prestigious University of Ghana, Aggrey-Fraser-Guggisbery Memorial Lectures. Professor Nketia closed it in at 90s.

I, however, developed my own relationship with him. We were together in the United States in 2000 when the African Studies Association, the biggest area studies group in North America, gave him its highest- The Distinguished Africanist Award for academic life achievement.

With a standing-respect from the thousands of scholars from around the world, he choked in his acceptance remark. And it was in the dedication name- his grandmother and first teacher of the ballads and forms of Asante music in Mampong, and all the good techniques that had with time made him a foremost authority on African ethnomusicology in the world.

I had the privilege of working with him for a week in Kumasi when I was production advisor to the Moving Vision television company of the UK and which was filming for eight months, a panorama of the Kingdom of Ashanti. Together with the late Professor Albert Mawere Opoku (Professor Abena Busia calls the two- Mr. Music and Mr. Dance) they were the experts on the performing arts part and interpreted the dance movements and their historical evolution as the contracted dancers and drummers dazed for the cameras.

When I called the late Professor Adu Boahen also in Kumasi about our production and those I was engaged with, he drove to our hotel and between drinking Club beer after another with Professor Opoku, indulged in their own dance steps; Professor Nketia, a teetotaler with soda water bottle by his side, a smiling face but all in onerous simplicity with the dancers; this pioneer triumvirate elite who’s like this nation may not see for generations to come.

That week and its massive visual recording is part of the over 600 hours of heritage materials now archived with the Moving Vision in Wales in addition to Nketia’s already phenomenal contribution to ethnic and palace music of Asante and Akan and, their poetic undertones.

On that working visit, he launched my book and company television documentary on Yaa Asantewaa at the cultural centre and was generous to do a 10 pm heaped review of it with OTEC FM. It was no wonder that scores of individuals had come to the studio afterwards to see the face of the extraordinary composer.

Years later when Professor Adu Boahen passed-on, I went to see him at the Institute about a GBC television obituary discussion with the Nigerian historian, Toyin Falola and David Owusu- Ansah of James Madison University for a musical funeral dirge. He easily recommended Nkradae by Ephraim Amu the deep meta-philosophical lyric of his befriended mentor. He told me that at every point in time, every soul in one form or another would have to engage in Nkradae - a farewell gesture or departure announcement from the earth.

I had not met with him many months before eternity. When I went to see Judith Opoku-Boateng at the Archives in Legon, it was an inquiry into the final times- the Professor’s Nkradae. Two weeks before and at his last visit, she said, he came to his beloved Institute of nearly 60 years to be interviewed- apparently his last, after which he laid his hands on each of the small staff he had worked with blessing each in a different way.

When Judith looked on perplexed, he asked her, “Akua Nketia, are you not coming for your blessing?” thereupon she knelt and received hers. Her surprise was that, though she was named after him, he ceased years ago to call her Akua Nketia until that moment. Blessings completed, he was taken to his car at the park and as they all stood- by, George Gyasi Gyesawalso at the Archives saw he did something irregular-waving at them with some solemnity at the car’s recession.

For he who spoke of the greatness of others in songs is now spoken of in the imitation of his own prowess- of the muses that visited and the compositions they blessed him with: