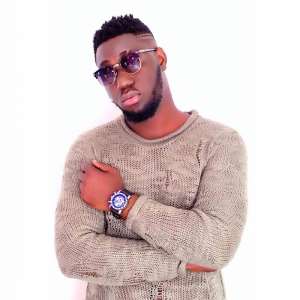 He has great looks, a strong and a soothing voice, alongside an influential management team to connect him to the world with his brand of music. Ladies and gentlemen, i introduce you to Mikey Benzy.

Fast rising Afro beat singer Mikel Cromwell known professionally by the stage name Mikey Benzy has announced the release of his new single dubbed ‘Odo’, a groovy danceable music with a production credit to Abe Beatz which he featured another great talent from Ghana Kurl Songz of Jenifer Lomotey fame to be released on 5th April 2019.

Mikey Benzy who is affectionately called the king of Afro Beat and the ladies man because of how he composes his love songs and his suave nature is hopeful this song will top charts. It can be recalled that Mikey spoke to journalists at the latter part of 2018 and promised them that he has a foreign tour and some fresh releases due to be released and it seems this is the time.

Whilst music lovers are appreciating his new work which is still enjoying rotation on radio and TV, he is billed to perform in London on 21st April, a bank holiday in the UK alongside highlife artiste Bless of Chochomucho fame. The holiday concert for Ghanaians will be happening at Conel College of Haringey Enfield at North East London with the post code N14 4RU.

The musical concert put together by Hot Digital and Alordia promotions promises to be one concert which will bring all Ghanaians in London under one roof. In an interview with www.sammyflex.com, Mikey Benzy told this reporter that he can`t wait to be in London as his fans have been expecting him since he released his first song. “I am upbeat about the success of this concert and i can`t wait for the day. Myself and Bless are charged up for this concert like never before” Mikey added.

According to Mikey Benzy, his latest song with Kurl Songs will take over Africa and raise the flag of Afro beat music to a higher limit. He explained that he did all his best to invest so much in the music video, got good locations for it that made it rich and colourful and again to win some awards.

Watch Slow Down released earlier by Mikey Benzy to appreciate his new work.