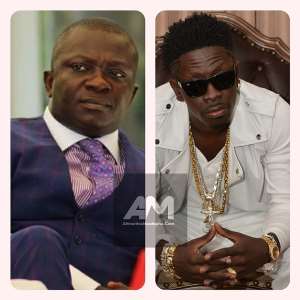 Information reaching Attractivemustapha.com indicates that the Member of Parliament(MP) for the Abetifi Constituency in the Eastern Region who doubles as the Minister of National Security, Bryan Acheampong has instructed the organizing team of "Bliss on the Hills" to collect a specific amount of money from Ghana's self-acclaimed dancehall king Charles Nii Armah Mensah who goes by the stage name Shatta Wale or the MP sues him.

According to a close source, Shatta Wale was billed to perform at the 2018 edition of ‘’Bliss On The Hills’’, an annual Christmas event which brings a large number of fun-loving Ghanaians to Kwahu in the Eastern Region of Ghana to enjoy a full week of music and other entertaining activities but Shatta Wale failed to perform during the programme which has caused the Chief Executive Officer of the event Bryan Acheampong to issue an ultimatum for the "Gringo" artiste to return the money or proceed to court.

The source hinted that even though the organizers had met all the demands of the artiste before the event, Shatta Wale got to the event grounds a few hours to the programme and made 'outrageous' demands.

Speaking in a separate interview with Nabil Alhassan, a member of the organizing team who directly contracted Shatta Wale on behalf of the "Bliss on the Hills" team, he confirmed that Shatta Wale was fully paid.

"We paid him and in fact his management team came for the balance in the afternoon of the event day but Shatta Wale refused to show up that same night to perform as agreed. "

He continued that Shatta Wale is supposed to return an amount of Ghc80,000.00 but he has refused to do that for three months now.

All attempts for Attractivemustapha.com to get Shatta Wale and his team to speak to the issue have proved futile.