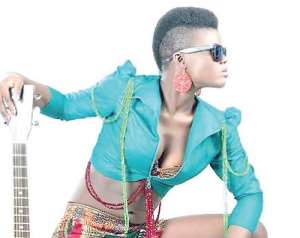 Afro-pop singer Noella Wiyaala last Sunday lifted the flag of Ghana high when she rocked the stage at the 32nd Ordinary Session of the African Union (AU) in Ethiopia.

The 32-year-old Afro-pop artiste from Funsi, near Wa in the Upper West Region, who sings in her native Sissala and Waale and English, set the entire Multipurpose Hall on fire when she performed at an event dubbed 'SDG Moment' to help achieve the United Nations much talked-about Sustainable Development Goals (SDGs).

Dressed in a typical African and Northern Ghana traditional wear, the energy with which she performed the single track held everyone in the room spellbound, drawing intermittent applause in spite of the poor sound quality provided by the technical men at the AU.

This was after she had been introduced by Ghana's own Anita Erskine, who was the MC for the occasion as 'the young lioness of Africa'.

She suddenly became the toast of the day, with almost everybody wanting to either shake her hand or take a picture with her.

The Afro-pop singer has rocked a number of international platforms alongside some of the celebrated international artistes, including Ahmed Soultan.

She was also the headline artiste at the 15th London African Music Festival held in London .

Wiyaala emerged as a solo artiste in 2013 and released two video hit singles on the Djimba World Label, 'Make Me Dance' and 'Rock My Body', which were both nominated for awards in the best discovery and the best reggae/dancehall categories in Ghana's 4Syte TV Music Video Awards for 2013.

In May 2014, Wiyaala was confirmed as the face of Pepsi Ghana and in June 2014 was nominated for female fashion personality of the year at the Fashion Icons Awards.

At the second edition of the All African Music Awards 2015, Wiyaala won best video for 'Africa', directed by Stanley Adjetey.