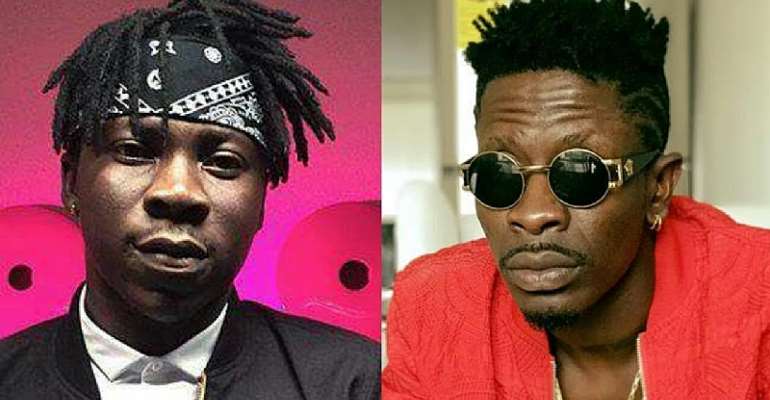 The rivalry and battle between the current top dance-hall artistes for the supremacy title in the genre still lingers on.

The fans of both artistes have joined the tug of war for the supremacy title.

Unarguably, Shatta Wale and Stonebwoy are two talented and hardworking artistes whose music works are putting Ghana on the global map. They both deserve support and respect.

But why is the struggle for supremacy now shifting to illogical reasoning levels?

Most recent debate about Shatta and Stone is the 'Quality vrs Quantity' battle that is trending. The debate is comparing things such as their Music, Personality and Prominence.

Quality: The standard of something as measured against other things of a similar kind; the degree of excellence of something. or A distinctive attribute or characteristic possessed by someone or something. (as defined by google)

The two definitions are uniquely relative and in all subjects that generally pertain to music, one cannot put either of the artistes ahead of the other.

It can be possible only when the issue is dealt with looking at specifics like awards, music sales, fan base and etc. The outcome will still be relative anyway.

In the context of 'Quality', Shatta Wale and Stonebwoy uniquely fits as successful dance-hall artistes with laurels to show for it. They are unique in their own ways. Let us not compare Apples to Pears.

Both Artistes love to use real life situations, jargon or even start a social trend with some funny lyric in their songs. Their originality is unwavering when it comes to composition of songs.

They both have numerous monster hits.

Stonebwoy has a silky voice and wider vocal range. Shatta Wale doubles as a music producer whose songs have become monster hits overnight. We cannot compare apples to pears.

Both artistes have qualities that are unique and valuable to their trade. They belong to a genre(Reggae & Dance-hall) that accepts both; husky and silky voices, calm and aggressive performers, controversial and anodyne personalities.

Many music enthusiasts and showbiz analysts have clashed on the issue of vocal quality and many choose Stonebwoy over Shatta Wale, but the truth is all musicians can never have same vocal box quality.

For instance, Beenie Man, Elephant Man are both Reggae Dance-hall artistes but they have unique voices and music prominence. We cannot compare the two.

Davido and Wizkid are very successful Musicians but they won't qualify in the list of best vocal musicians in Nigeria. Davido has a husky broken voice and Wizkid has a mid-tempo voice that is not very great on low or high notes.

Quantity: The amount or number of a material or abstract thing not usually estimated by spatial measurement. or The extent, size, or sum of countable or measurable discrete events, objects, or phenomenon, expressed as a numerical value. (as defined by google)

A lot of things would come to play when we bring the issue of quantity into the debate.

Both artistes have received enough both locally and internationally, and at instances where they were both in same categories, one definitely outwits his opponent either locally or internationally.

But do awards really define a musicians effort?

l believe it can easily be bought or given to the undeserving. Awards are not always fair to artistes.

All artistes do not move at the same pace when it comes to working to release songs or albums. In terms of number of songs to be on the album, it is up to artiste to decide.

In terms of reach or how far it goes, it is often dependent on the management of the artiste, who they contract and how much money they invest into it's promotion.

It is an endless to-do list. Do we have to compare artistes?

All mainstream artistes have hits that qualify them to be in the limelight. Some artistes produce 50 songs with 10 hits whilst other produce 20 songs with 5 hits.

What matters mostly is that the hit song wins the artistes prominence. The only issue here is that, some hits were made by investing a fortune(other artistes spend nothing) in promotions that are often not recouped.

However, same hits maintain the relevance of the artiste for future deals, awards and endorsements.

Every artiste no matter how big or small have a fan base. All artistes have loyalists(die-hard fans) who would supports anything(good or bad) they do.

They go to the extend of loving and defending anything that is affiliated to the artiste.

Some music connoisseurs believe an artiste's fan base goes a long way to deepen their prominence.

Though, the claim is debatable, one cannot also rule it out totally.

Therefore, considering all the above-listed pointers, it would be a little misplaced to try and put the two artistes(Shatta Wale and Stonebwoy) into the one box.

This 'Quality vrs Quantity' description debate between the two artistes may never come to an end because of the subjective views and analysis that may come out without scientific proof or backing.

The comparison between Shatta Wale and Stonebwoy cannot end. Supporting both artistes and many others in the music industry would be a better decision.

However debates of such nature puts the artistes involved on their toes to deliver better sometimes.