That London Girl Is Nothing To Me – Kuami Eugene Clears Air 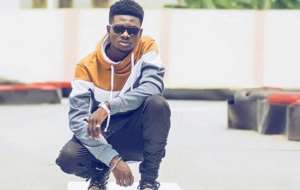 Lynx Entertainment signee, Kuami Eugene has finally decided to set the records straight about his perceived relationship with a London girl she recently posted on his Instagram handle. The ‘Wahala’ recording artist told B Ice of Kumasi based Agyenkwa FM that he is not in any sort of relationship, be it a romantic or friendly one, with the lady.

The born rock star revealed that he only met the lady recently in London during a video shoot for one of the songs on his about to be launched ‘Rock Star’ album. He also disclosed that the lady was one of the many ladies who featured in the video that is yet to be released.

The ‘Confession’ hitmaker also revealed that he took pictures with all the models who were on set for the video shoot and that the picture people saw circulating on social media was one he internationally posted. The VGMA best new artiste for 2018 also told B Ice that he has other pictures with he took with other white ladies from the particular set he will be releasing later.