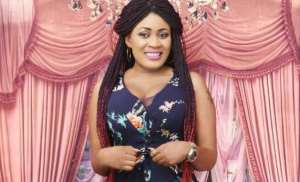 Nayas 1 has come out to react to the recent reports in the news and media space that she has stated that she want to date Paedae of R2bees fame.

The actress and movie producer in a quick chat with Zionfelix on his ‘Zionfelix Uncut’ Show, stated that she is already in a very cozy relationship and does not need a new one with the rapper.

She added that she was surprised when she saw that particular news item trending on social media. Even though Glady Mensah Boaku admitted that she was at that particular radio station mentioned in the story, she stated that she never uttered those words. She revealed that the only reason why she went to Hello FM that day to advertise their upcoming movie, ‘Justice Denied’.

Nayas 1 further told Zionfelix that in as much as she is looking for a man, Paedea is not the type of man she wants. She also reveals that she currently has a lot of marriage proposals on her laps she is considering because she does not want to make any mistake.