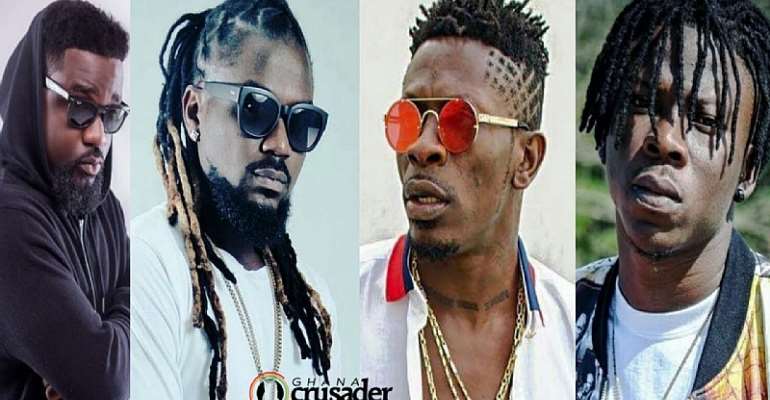 The issue of Ghanaian Music icons being disrespected and disappointed by Nigerian fans at a Menzgold Concert spells the need for us to rise to not only support our own but to push our own beyond the borders of this country for the acceptance we crave.

In Ghana, we are good at talking and reducing "something" to "nothingness" whilst in other countries, they're always fighting to put everthing that concerns them first.

Put Ghana against Nigeria anyday on the issue of " Who Best Supports their own" and Ghana would always receive a knockout in the first round.

We live in a country where a huge fraction of the majority do not feel it is right for one of theirs to shine or move higher with their God-given talents especially when they know of their flaws(as if there's one perfect).

Whether true or not, we can all admit how we destructively criticize and tear down the pillars of the careers of our very own gifted and talented.(Maybe, the days to change the hands of time are here!)

I don't mean to say criticism is wrong or not to be encouraged. Infact, I believe it is the best thing to shape any good thing into greatness especially when it is done constructively.

In Ghana, everything is jammed or put together in one pot during criticisms.

To an extent you cannot criticize any wrong act(corruption) committed by someone who appears to be loved by some group of people. It is termed hate in Ghana(the consequences always bring disgrace).

On the other hand, some criticisms go beyond its limits into the destructive where the issue at hand is not only tackled wrongly but the person involved and all that concerns him/her is swept into the dirty pool of destruction.

For instance, the voice texture and way of dressing of a rapper can easily be compared to a hiplife singer or dancehall artiste which shouldn't be the case if all the genre's would be assessed critically, yet such arguments could take weeks until the opinions become divisive creating unknown enemies for the musicians involved.

The steam even gets hotter when a new talent shows up trying to climb the music ladder to share their craft with others. You can't stand a Ghanaian critic especially when they don't see any value in your craft - trust me, you would fold up like paper(or banks that need liquidity support).

It is very humiliating what you'd sometimes go through when you give out your work to be critiqued or ask for a chance to be heard.

Sometimes, the demoralizing feedback could easily make you give up on your music dream or hibernate it till further notice. It is the bitter reality many won't accept or admit to but it lives with us.

In the past, you switch on your radio and the starting tune for a Ghanaian local show is from a foreign artiste when the DJ has stacked up lots of CD's containing songs from many potential Ghanaian artistes who can become global icons with the slightest push and direction. I personally don't think Nigerians would tolerate that with the little experience I have gotten from them.

Today, things might have changed abit about our radio and television stations supporting our musicians by playing more local songs but the question is how expensive is the support? Does it come at a rate that is applicable to all?

Unfortunately, trying to get Ghanaians to accept, celebrate and confidently defend their own is arguably the most difficult thing to do as a musician.

I know this for a fact, from my experience as a journalist who doubles as a gospel singer and rapper - when I released my first song as a contemporary gospel artiste. For once I had a fair share of the ordeal.

Despite the many media colleagues, links and friends I had, it took me some "level of effort" that was not easy to even get stories of my songs on media timelines.

What will the full time talented young unknown musician without a manager or financial support do?

You can be best at whatever craft, but until you buy the hands(Managers), eyes(Critics), mouths("Endorsers") and legs(Influencers) to get you into the game and keep you afloat in the industry, trust me - your talent could be the most promising but it would end up serving no purpose.

Try and ask Joe Mettle, Sarkodie or Shatta Wale how the journey has been from the start till now?

Growing up as a young lad with a passion and interest for the arts, I came to meet most of Ghana's top musicians fighting amongst themselves claiming the title of supremacy when they could be joining forces to raise new talents to build an empire of legendary musicians for the global platform.

Personally, as a young journalist who worked with one of the best media houses in Ghana, doing a report on a new talent always came with many questions from producers where mostly my answers to defend the artiste was never enough. E.g. Who is S/he? Why should the story be considered as part of the line-up? Who knows this person?

The recent Ghana Meets Naija MenzGold Concert that has gotten a fraction of Ghanaian celebrities talking about disrespect should teach us to rise to support our own.

From hilife, hiplife, reggae, hip pop to gospel - I found more than two artistes that were at each others throat trying to tear down their wings of flight just for the supremacy title.

Competitiveness is a great exercise that puts craftsmen on their toes to give out their best, but apart from what I see in the western world that serves a better purpose of lifting the laggards and perfecting the swift at the game, you would mostly see destructiveness here on the local scenes.

We are always ready and eager for any absurd news to pop up about a Ghanaian Musician or celebrity in any field, we immediately turn him/her into the "walls of Jericho" and make sure our destructive shouts will either bring them down or retire them prematurely.

I still remember how the comparison and the battle for "Who's the Best" or deserved to be given the attention took centre stage between artistes: e.g. Daddy Lumba vrs Nana Acheampong, Obrafuor vrs Lord Kenya, Batman vrs Yoggi doggy, Tinny vrs BukBak, Okyeame Kwame vrs Obrafuor, Samini vrs Shatta Wale, Sarkodie, EL, Manifest and the many others in hip hop not forgetting some of the female gospel icons.

It is quite unfortunate to classify all the above listed "battles" under the "Crabology Syndrome" spirited by Ghanaians but at a certain degree it became destructive ejecting many promising artistes out of the mainstream circles, destroying visions, making talents useless(dormant), unattractive and not investment worthy.

The destructive brouhaha that has surrounded the music industry locally for a long time, has always killed one long standing career or destroyed an emerging talent at it's infancy stage but we pretend to notice our inclusion in all of these outcomes or even take responsibility for the low number of quality artistes we have out there.

Do we deserve the applause for the good work done for ourselves as Ghanaians supporting their own?

Today, we cry about how Ghanaian musicians are disrespected here in Africa or anywhere in the world, but we still look down on the young promising talents, when every now and then Nigeria is introducing to the world a new talent.

Today, we have an artiste like Patapaa whose "one corner" song took him across the borders of Africa to the western world. Yet we still don't think he represents a true Ghanaian musician.

Truth is, Patapaa who is also known as "Patapeezy" did not get that international recognition because of his melodious voice or intelligent music composition but because he got friends who supported his not too perfect music craft by creating a dance-craze that caught the attention and admiration of many globally.

When the issue of who owned Azonto music and dance came up, Nigerians supported P-Square throughout but here in Ghana, it was a divisive issue even between the local artistes and celebrities.

So who do we blame if Ghanaians know more Nigerian artistes and sing their songs than Nigerians who know Ghanaian artistes?

I have followed keenly and even contributed to several issues of Artiste comparison between Ghana and Nigeria and at all times you'll find both Nigerian Celebrities and commoners running to support their own but in Ghana, many celebrities just fold their arms and watch their neighbors destroy the harvest of their fellow. Who is to be blamed?

Until we begin to love, cherish, support, respect and defend our own, we won't have much to show the world because in the end we destroy the same seedlings that will grow to become that beautiful giant tree the world wants to see and be part of.

Maybe we can visit the kingdom of the ants and learn how as tiny as they appear, they succeed in building hills that can be seen by all.

Fact is, until we do the needful, let us accept the rewards of our deeds in good faith because we always contribute immensely to what brings us the desired outcome.

By: Listowell Acquaye
(The writer of this article is a final year student of the African University College of Communications and winner of the 2017 National Student's Awards - Best Student Journalist Award)