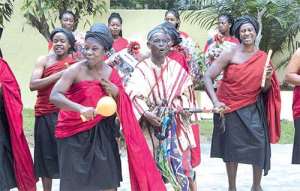 The pounding of drums echoes throughout the courtyard of the W.E.B Du Bois Centre for Pan-African Culture on a Wednesday morning, July 25, 2018.

The situation was not different at the George Padmore Research Library on African Affairs at Ridge, a suburb of Accra, and the Kwame Nkrumah Memorial Park.

Men and women from all walks of life, especially with African heritage and dressed in black and red attire, sit beneath tents of the same colour scheme waiting for the main speakers to take the stage.

While people, mostly of Ghanaian descent from the Caribbean, ambassadors of Mali and Zambia to Ghana, students and youths from the Americas, Africa and Ghana are seated, two Ghana Dance Company performers move to the music with shared smiles.

This day is different from any other, in that it marks the beginning of a week-long celebration in honour of Ghanaians and Africans in general, emancipation from slavery. 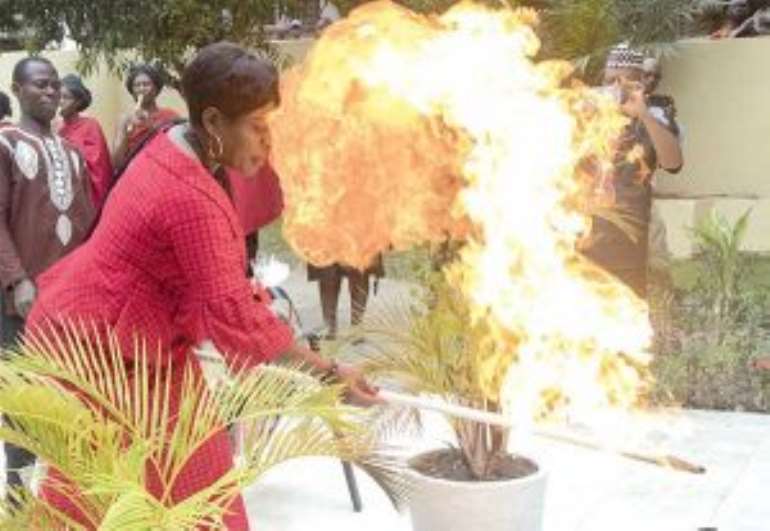 Wreath Laying, Backgrounds
To mark the start of the celebration which ends in the Central Region of Ghana with visits to the Cape Coast Castle and cooking competition to ascertain who is good at preparing Ghanaian meals, as well as a symbolic crossing of the Assin Praso River, wreaths were laid in honour of the memories and legacies of three key personalities in the liberation struggle of Ghanaians and Africans, namely W.E.B. Du Bois, Nkrumah and MrPadmore.

Four wreaths each were laid in honour of their memories on behalf of the government and people of Ghana, traditional rulers, diaspora and youth of Africa. It was accompanied by the Atenteben funeral dirge, a diatonic bamboo flute developed by composer/Prof Dr Ephraim Amu in the 1920/30s.

The Minister of Tourism, Culture & Creative Arts, Catherine Afeku, performed the wreath laying on behalf of the government and people of Ghana, whilst Maria Daniels, a representative of the African-American Association of Ghana, did so on behalf of the diaspora.

The first to receive the honour was William Edward Burghardt (W.E.B.) Du Bois, who was an American sociologist, civil rights activist and Pan-Africanist. Wreaths were laid on his grave at his memorial centre.

Believed to have been born on February 23, 1868 in Great Barrington, Massachusetts, USA, Du Bois reportedly grew up in a relatively tolerant and integrated community.

He accordingly rose to national prominence as the leader of the Niagara Movement, a group of African-American activists who wanted equal rights for blacks.

Du Bois and his supporters, according to historical accounts, opposed the Atlanta – compromised an agreement crafted by Booker T. Washington which provided that Southern blacks would work and submit to white political rule, while Southern whites guaranteed that blacks would receive basic educational and economic opportunities.

Du Bois was first invited to Africa to participate in the celebration of Ghana's independence in 1957 but was reportedly denied the opportunity by the US government which confiscated his passport in 1951.

However, by the year 1960, the 'Year of Africa' – Du Bois had accordingly recovered his passport and was able to cross the Atlantic and celebrate the creation of the Republic of Ghana.

George Padmore
The minister and her entourage, journalists and the several guests who attended the function later visited the Padmore Library to lay wreaths in honour of Mr Padmore on his tomb located within the gardens of the famous library.

There was the lighting of the perpetual flame by the minister and filing past of his tomb, especially by persons from Trinidad & Tobago, among them were Anthony Jordan, Ghana Country Manager of the Republic Bank of Trinidad & Tobago.

Born as Malcolm Ivan Meredith Nurse in Arouca District, Tacarigua, and Trinidad probably in 1902, Mr Padmore played an active role in developing the Pan-African and Black Labour Movements For Change in the 1930s and 1940s.

Whilst in England, he forged links with fellow Trinidadian, C.L.R. James and the British Guianese, Ras Makonnen, Director of the Padmore Library, James Naba, revealed.

Mr Padmore is reported to have accompanied Dr Nkrumah on various African tours, unfortunately but after two years on the job, his health began to fail, Mr Naba stated.

He was diagnosed with liver cirrhosis and died in London on September 23, 1959. After a funeral service at a London crematorium, Dr Nkrumah requested for his ashes which were brought to Ghana and interred with due ceremony at the Christianborg Castle, Osu, on October 4, 1959.

Later in 1992, ex-President Flt. Lt. (Rtd) Jerry John Rawlings moved his tomb to its present location, to the grounds of the library dedicated to his memory.

Struggle Lives On
The wreath laying exercise ended at the Nkrumah Memorial Park, as Chief Executive Officer (CEO) of the Ghana Tourism Authority, Akwasi Agyeman, told the audience that “I believe laying these wreaths to remember the struggles of the Pan-Africanists­ – W. E. B. Du Bois, George Padmore and our celebrated first President Kwame Nkrumah – brings to bear their struggles for us and those behind us to learn about their struggles and to also serve notice that the struggle continues.”

He added, “The struggles against deprivation continue. The struggle against poverty continues.”

History of Celebration
Ghana Tourism Authority describes Emancipation Day as “the day set aside for the celebration of emancipation of slaves in the Americas and the Caribbean.”

The celebration is also considered an occasion to encourage descendants of Ghana “to come back home and help rebuild Ghana and for that matter Africa in general and the call for returning home of all Ghanaians in the Caribbean and the Americas in general.”

“We must make it a solemn oath to connect with the continent. If, indeed, it is within the power of the Ministry of Tourism, Arts & Culture and the good people of Ghana, we would say every person, every African on the continent and in the diaspora, must make a pilgrimage to Ghana,” she added.

That day in the lives of freed slaves falls on the first day of August as per the Emancipation Proclamation in the United States of America (USA).

The celebration of Emancipation Day originally started in the Caribbean in the year 1834 and this year marks its 184th edition.

Ghana started celebrating Emancipation Day on August 1, 1998 in solidarity with her brothers in the diaspora.

The day was also introduced in Ghana (then Gold Coast), which was the major trading route during the Transatlantic Slave Trade era which began in the 15th century, after the Portuguese began exploring the coast of West Africa, to celebrate the country's liberation from slavery and to connect Ghanaians home and abroad in an appreciation of their common ancestry.

Scars
The Director of the W.E.B. Du Bois Memorial Centre for Pan-African Culture dedicated on June 22, 1985 in Accra, Constant Gladzah, explained that one of the worst problems posed by the slave trade was the destruction of the family.

But Madam Afeku indicated that the destruction of the family system should no longer keep Africans apart from one another.

She said, “We are separated but we are together and we must rekindle that family bonds through economic emancipation, through cultural emancipation and tell the whole world that it is one big family, just scattered and we are one in spirit and in heart.”

Reflection
As Ghana reconnects with its descendants in the diaspora and urges them to return home and contribute to its socio-economic development, Madam Afeku called for a sober reflection on the heroism, courage and legacies of Ghana's freedom fighters who refused to remain in chains.

“We are also celebrating this event not as a mere event, but as a remembrance for our ancestors who fought, who died, and lived to tell their story. As we mark the celebration, I want you to reflect on their heroism, their courage, their indomitable will of the struggle and it is their legacy that makes us continue to lay wreaths to remember and also to continue to remind the generations yet unborn,” she pointed out.

Madam Afeku continued, “This is an occasion for us not to ever entertain the notion that we are less of a people because of that unfortunate history.”

She urged Ghanaians both home and abroad to pick lessons from the country's rich history to guide their actions in the modern age, explaining that every effort must be made to free themselves from slavery.

Prof Horace Campbell, Kwame Nkrumah Chair of African Studies, Institute of African Studies, University of Legon, Ghana, who delivered the keynote on the occasion, said it was about time the Emancipation Day was incorporated into the curriculum for schools in Ghana as it's done in the Caribbean.

Unity Call
There was call on all Africans to unite for a common cause – the development of the African continent and the black race.

Mr Gladzah was of the opinion that “as long as one is a black, one is an African with a common heritage and destiny” and thus there was no reason whatsoever for Africans to discriminate against one another.

“We must use our freedoms to foster healthy families,” the director added.

Madam Afeku reiterated that Africans must be proud of their heritage, saying, “We must draw on the rich reservoir of our history. Our oral traditions, our folklore, our spoken word, yes our music, our poetry, our movies. It is a time to celebrate the resilience of the African spirit.”

BY Melvin Tarlue & Will Tierney