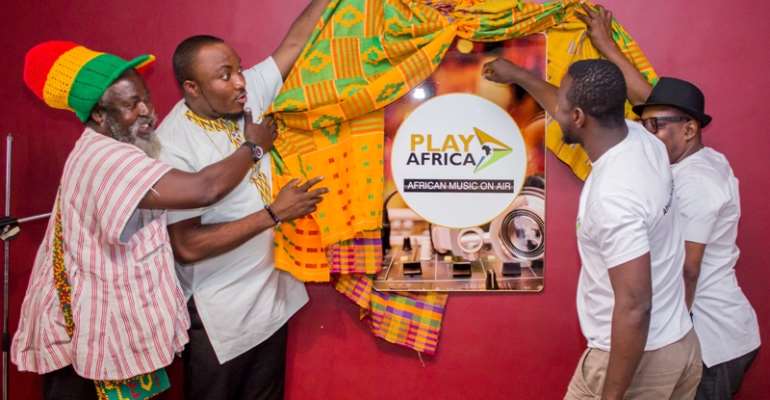 A press conference held at Badu Lounge in Accra recently had key MUSIGA and GHAMRO stakeholders as well as the media and some musicians in attendance.

Play Africa is an application which only promotes, stream and sell only African music. The application runs on Android and iOS.

This application is one that will register every song that has ever been produced from every country in Africa.

Play Africa is a musical platform where people will have a renewable subscription monthly to be able to access songs from their favorite artist.

In every African country people can pay for subscription from their local currency. Payment for subscriptions or purchase of a song can be done easily using all Mobile money platforms and all credit card systems.

On Play Africa people can buy albums or single tracks. Play Africa seeks to end piracy from the African continent and that every song purchase stays in a Play List on the APP.

The Play Africa Playlist can also be downloaded on every computer so that songs can easily be synchronized and listen to everywhere.

The estimated cost for the App for a period of 5 years is $1,2million.

However, Play Africa seeks to generate a revenue of $25billion by 2030.

Isaac Yeboah Filson, CEO of Play Africa Music in his address at the press conference says, “the music store seeks to hit about 5million subscribers across Africa within the next 5 years and raise revenue of about US $23 billion by 2030.

For the past 5 years we’ve been working around to put this together to serve the Ghanaian and African market. And we are privileged to have succeeded in making this dream materialize.

Play Africa Music (PAM) will be the biggest music network in Africa. We have singles selling as low as between 50 pesetas to 99 pesewas.

There are also streaming options that cost as low as GHC 6. There are other mouthwatering packages that exist if you download the app. We have made it very feasible for music lovers to easily buy songs with the Mobile Money accounts, PayPal and Credit Cards.”

“Interestingly, with our pilot project, people seem to be buying old songs than even the new ones – which means that, we need to build a good library of songs and albums that have been released several years ago.

Even though there are free download platforms, we can build our own network and generate more income for our music. Besides, we must stop putting out music for free, it has to be paid for.

One good thing about our service is that, songs bought from our store will only be active and played from our app – they cannot be downloaded onto any third party material,” he added.

According to the CEO, Play Africa Music seeks to partner and produce songs and albums Artistes in order to produce quality and standard content for the music store. All countries to subscribe have the charge equivalence in their local currency.

Bessa Simons, 2 Vice President of MUSIGA and Veteran Musician who graced the occasion was very happy about the service. “Play Africa Music is the greatest thing to happen to Ghana Music Industry.

I wish this had happened when I started doing Music actively to sell proper. All the same, it’s here at the right time. MUSIGA is in full support of this and will continue to support.

I urge all Ghanaian Artistes to sign up. And the ones who have already signed up, I’m happy for them.

The app is available for all android users on the Google Play Store. It will soon be available on iOS for Apple gadget users.