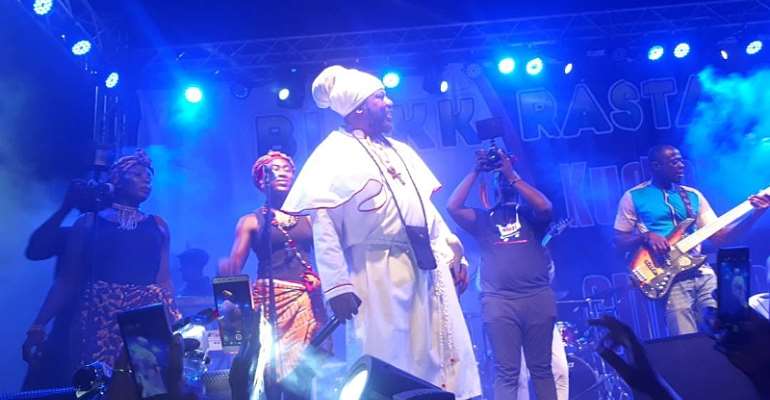 Saturday, February 3rd 2018 will go down in history as a day Kuchoko and Reggae lovers will forever remember and cherish as radio presenter and musician, Blakk Rasta gathered thousands to the West Hills Mall where he mesmerised the multitudes with crazy performances, stage craft, quality live band music and decent non-smoking crowds (unlike in most Reggae gatherings) in an event dubbed KUCHOKO IN THE GHETTO.

Blakk Rasta, who mounted the stage at a little after 11pm was greated with huge uproars from fans who obviously missed him after three years in absentia. He belted hit song after hit song as he asked the fans which songs they wanted to hear and he perforned just those.

The energy was tremendously unbelievable and left many wondering if the artiste would be left standing after sometime or just drop off flat. After about an hour on stage, the fans refused to let the artiste go as the shouted and cried for me. But, the obviously tired Blakk Rasta, begged them to allow him to take a rest abd return which the fans rejected. We went on performing with untold energy until the Mall authorities asked to have the concert closed for security reasons.

When the concert finally ended, security personnel could not stop the fans from clamouring around the artiste for autographs. This took another one hour till he was finally whisked away. Serwaa Akoto, Barack Obama, Ganja Sweet, Chucku Laryea, Iyawata, Zantan Bua were some of the several songs he performed.

Other artistes who performed included Osagyefo who also had some great energy and power; Redfyah, Knii Lante, Vibration Kings, Isaaqa-Ba and Black Emprezz. They all impressed with good performances and the fans waited till all performances were over. Sound was provided by Silicon House while Beatrix Investments provided lighting and Stage.

In an interview with Blakk Rasta, he said he was doing KUCHOKO IN THE GHETTO to give his numerous Kuchoko fans the chance to meet with him and get closer and also, to appreciate their continual support and patience fir him. The next stops will be Nima and Ashaiman where the crowd is expected to even be greater and will certainly require more security to deal with having seen what happened at the West Hills Mall.

Kuchoko is a brand of Reggae Blakk Rasta has initiated with the help of sound engineer and producer, Zapp Mallet and Korkor Anarteifio to highlight more African values, sounds and instruments but still keeping to the Reggae rythym.