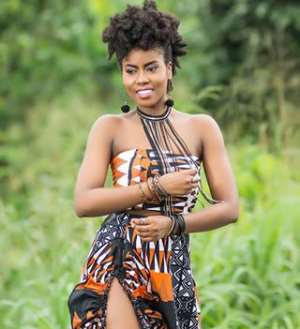 Rather, the ‘Natural Girl’ hit maker has disclosed that her all time crush has been Chris Attoh, celebrity divorcee.

According to Mz Vee, she featured Chris in the music video of her latest song ‘Come see my moda’.

"I'm not dating and haven't been in any serious relationship all my life. Ignore all rumours about an affair with Kuami or anyone known or unknown. I'm not dating a certain rich guy."

"I'm still single but I have a long-time crush on Chris Attoh," she disclosed.

Mz Vee added: "I featured him in my latest video because I wanted to use the opportunity to be around him and possibly hug him at the end of the video".

"Most guys are playing with girls and not serious about their promises and it gets frustrating. "Come see my mother if you're ready," she said jokingly.

Mz Vee further called on her fellow female musicians to support each other and not subscribe to hate and backbiting.

She also rubbished media reports that she has a beef with Ebony.

"I support other female acts and believe in them. Ebony is doing amazing stuff and I like her for that but the media is just not reporting what needs to be read"

"Most of these writers are geared towards the traffic they will get hence the sad headlines, I have no banter with Ebony," she disclosed.

She also disclosed the idea of releasing her fourth album later in 2018, an extended high school tour and other musical projects.