The premier: The Wedding Party 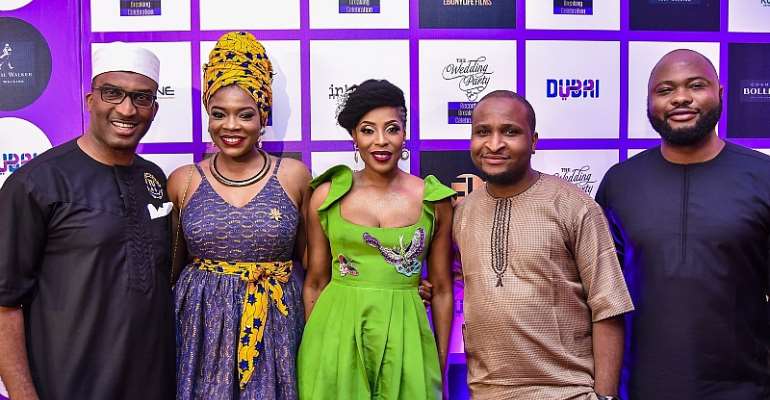 It was an exciting evening of high-fives, smiles and hugs as the cast and crew of ‘The Wedding Party’ on Sunday, celebrated a successful cinema run with a fabulous wedding-themed costume party at the Sky Lounge, Eko Hotel and Suites, Lagos.

The party, which doubled as a ‘record-breaking’ celebration, began on the red carpet where the glamorously dressed guests posed for photos while answering questions from the press. They were then ushered into the Love Lounge, welcomed by a choice of canapés and signature cocktails from the Johnnie Walker, Baileys and Ciroc bars.

Guests were later directed to the rooftop terrace with its stunning view of the Lagos skyline and lagoon for the highlight of the evening - the official announcement of total box office takings now in excess of ₦450 million.

From the FilmHouse IMAX cinema in Lekki, to the Genesis Deluxe cinema in Owerri; from Viva Cinema in Ilorin to Silverbird in Abuja, the long ticket queues and sold-out viewings are true testaments to the cinema success of the movie.

Subsequent to its theatrical release in December 2016, ‘The Wedding Party’ racked up ₦203 million in just two weeks topping the 2016 Nigerian Box Office and becoming the highest-grossing Nollywood film ever. In 2017, ‘The Wedding Party’ continued its record breaking streak with takings now in excess of ₦247 million bringing its combined total to ₦450 million.

According to Executive Producer, Mo Abudu “We set out, quite deliberately, to make a high-quality film that any Nigerian would be proud of and could relate with. ‘The Wedding Party’ has shown that the best Nollywood movies can beat the Hollywood blockbusters in their home territory. For the first time, Nollywood is competing with Hollywood at the Box office and winning…”

To toast the announcement, a 4-tiered cake was cut by the ‘celebrants’ whilst bonuses were presented by the Elfike Collective to its hardworking cast and crew including Director, Kemi Adetiba.

Set in Lagos, Nigeria, The Wedding Party is the story of Dunni Coker (Adesua Etomi), a 24 year old art gallery owner and only daughter of her parents about to marry the love of her life, IT entrepreneur Dozie (Banky W).

“Even those who lost elections are thanking people, what are...
54 minutes ago

Komenda Sugar factory 'collapsed' under Mahama; if not, why ...
54 minutes ago