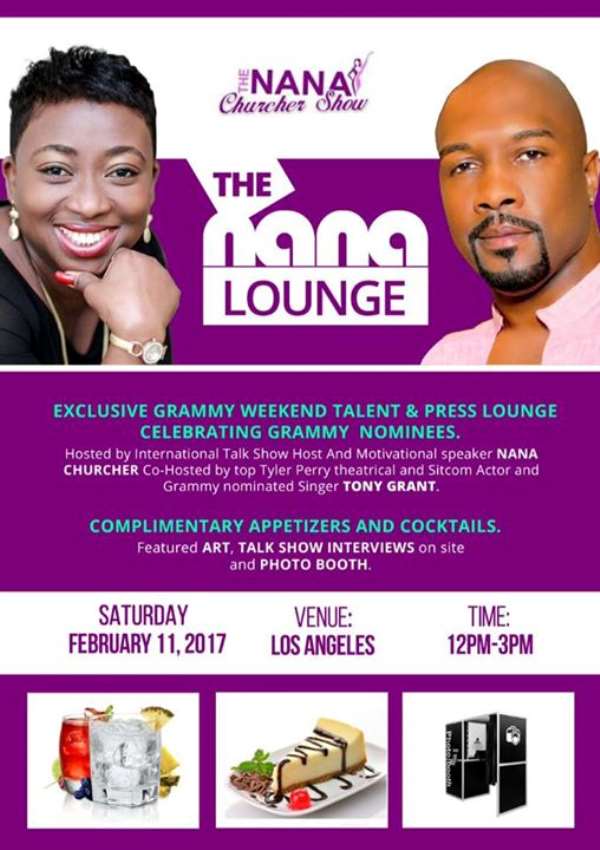 The Grammys is here once again! This year’s Grammy Awards press party and lounge, “The NaNa Lounge”, is set for Saturday February 11th in Los Angeles, California. Known to be the most anticipated media event during the Grammy week, “The NaNa Lounge” will be that glamorous event for live interviews with Grammy nominees and Hollywood celebrities while honoring the press.

The Producer and Publicist for the show, Ericalane Brown, on behalf of the organizers announced the presenters of the “The NaNa Lounge”. International talk show host and motivational speaker, Nana Churcher will be paired with Grammy nominated singer and top Tyler Perry theatrical as well as Sitcom Actor, Tony Grant, as the host and co-host respectively.

Nana Churcher is the presenter of The Nana Churcher Show (TNCS), a weekly exciting television content which features captains of various industries as guest who open up on their rise to fame and fortune as well as share their success stories. A thirty-minute motivational chat show, it seeks to inspire viewers to become change leaders in their chosen fields of specialty and also empower them to become agents in transforming their societies.

As a popular destination for the top commentators, columnist, entertainment writers, and music reviewers. Commenting on the show, Ericalane Brown said “The Nana Lounge is the premiere social event connecting talent to press and press to brands during Grammy week positioned as a red-carpet reception interview lounge for press and talent”.

“The NaNa Lounge” is sponsored by Rebecca Laclair, Dizaind, Chipotle, Pizza Hut, Adwoa Design, Tracy Lynn Jewelry, Movie Star Leather Stickers and To Whom It May Chocolates. Others are Reboundwear, The Bullet Studio ( www.thebulletstudio.com ), Watch Ya Mouth and Earin M-! True Wireless.