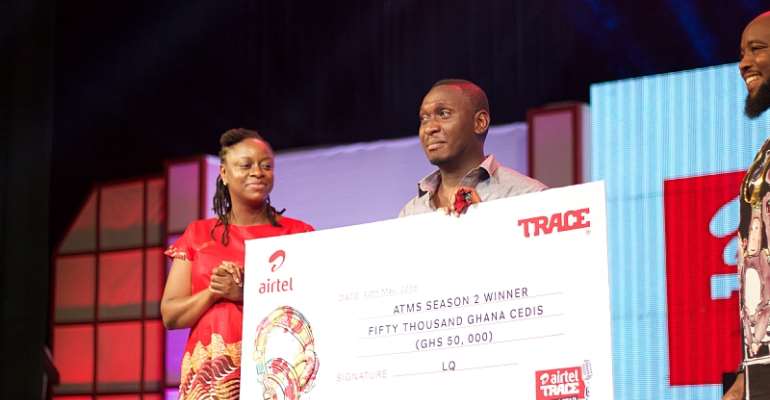 Accra, 16th May 2016 – The second season of Africa’s most innovative and audition-free talent search, Airtel TRACE Music Star competition came to an ecstatic end at the National Theatre, Accra, last Friday, after 2 months of search which, got over 200,000 entries, and, Moses Ugheighele outperformed other finalists to win the ultimate with some uproarious performances on the night. Moses will represent Ghana in the Pan African grand finale in Nigeria later this year.

The event was graced by great performances from the biggest acts in the Ghanaian music industry including EL, Efya, Joey B and Mr. Eazi.

The five contestants Ama Yeboah, Moses Ugheighele, Fathia Gyimah , Sedem Afaglo, and Harry Gantuah who thrilled the judges on the night, ‘Grand papa’ of Hip life Reggie Rockstone, the Multi-talented singer and songwriter Becca and popular radio personality, Sammy Forson were judged for their originality, voice pitch, tone and creativity and their ability to move the audience.

Moses, upon being announced the winner on the night, broke down in tears amidst wild cheers from his fans and the numerous admirers he attracted with his powerful voice, expressing his gratitude for the love and support over the few months, “I want to thank you all, my family and friends for the support and most importantly Airtel and Trace for this opportunity you have offered me and all the finalists. I want to promise you that I will do my best at the Pan-African competition in Nigeria to make Ghana proud”.

Airtel Trace Music Star is a mobile phone based music competition which has simplified the otherwise tedious auditioning processes that typifies most music competitions. All participants did was to simply call the short code 533, recorded a song and stood the chance of winning a life changing contract with a record label, a mentorship programme with American singer-songwriter Keri Hilson in Atlanta and worldwide media exposure through various TRACE’s platforms.

About Bharti Airtel Bharti Airtel Limited is a leading global telecommunications company with operations in 20 countries across Asia and Africa. Headquartered in New Delhi, India, the company ranks amongst the top 3 mobile service providers globally in terms of subscribers. In India, the company's product offerings include 2G, 3G and 4G wireless services, mobile commerce, fixed line services, high speed DSL broadband, IPTV, DTH, enterprise services including national & international long distance services to carriers. In the rest of the geographies, it offers 2G, 3G and 4G wireless services and mobile commerce. Bharti Airtel had over 353 millioncustomers across its operations at the end of January 2016. To know more please visit, www.airtel.com

About Airtel in Africa Airtel is driven by the vision of providing affordable and innovative mobile services to all. Airtel has 17 operations in Africa: Burkina Faso, Chad, Democratic Republic of the Congo, and Republic of the Congo, Gabon, Ghana, Kenya, Malawi, Madagascar, Niger, Nigeria, Rwanda, Seychelles, Sierra Leone, Tanzania, Uganda and Zambia. Airtel International is a Bharti Airtel company. For more information, please visit www.airtel.com, or ‘like’ the Airtel Ghana Facebook page via www.facebook.com/airtelgh or follow us on Twitter via the handle @airtelghana.